Corporations bought a record amount of clean energy through power purchase agreements (PPA) in 2018, shattering the previous record set in 2017 a new report by BNEF found. 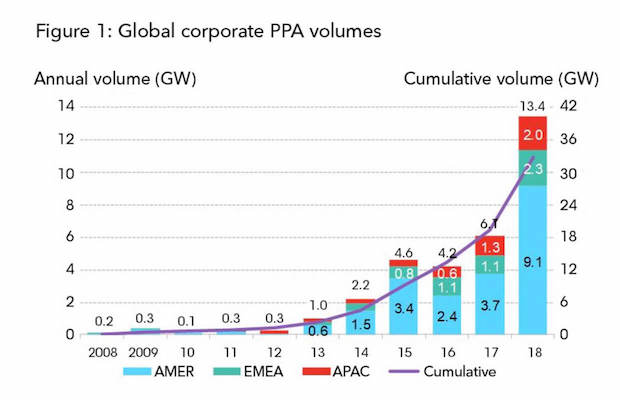 BloombergNEF has revealed in its 1H 2019 Corporate Energy Market Outlook, that around 13.4 GW of clean energy contracts were signed by 121 corporations in 21 different countries in 2018. This was up from 6.1GW in 2017, and positions companies alongside utilities as the biggest buyers of clean energy globally.

Jonas Rooze, head of corporate sustainability for BNEF, said, “Corporations have signed contracts to purchase over 32GW of clean power since 2008, an amount comparable to the generation capacity of the Netherlands, with 86% of this activity coming since 2015 and more than 40% in 2018 alone.”

More than 60 percent of the global activity in 2018 occurred in the U.S., where companies signed PPAs to purchase 8.5GW of clean energy, nearly triple the amount signed in 2017. Facebook spearheaded a contingent of experienced U.S. corporate energy buyers, purchasing over 2.6GW of renewables globally in 2018, primarily with utilities in regulated U.S. markets through programs known as green tariffs. This was three times that of the next biggest corporate energy buyer, AT&T.

Kyle Harrison, the lead author of the report, said, “The aggregation model has heralded in a new generation of corporate clean energy buyers. These companies no longer need to tackle the complexities of clean energy procurement alone. They can share risks associated with credit and energy market volatility with their peers.”

In the Asia-Pacific region, still a nascent market for corporate procurement, companies signed a record 2GW of clean energy PPAs, more than the previous two years combined. Nearly all of this activity occurred in India and Australia, with roughly 1.3GW and 0.7GW of clean energy purchased, respectively. Both markets allow companies to buy clean energy at a large scale through offsite PPAs, making them rarities for the region.