According to the BNEF estimation, second terawatt of wind and solar will arrive by mid-2023 and cost 46 percent less than the first. 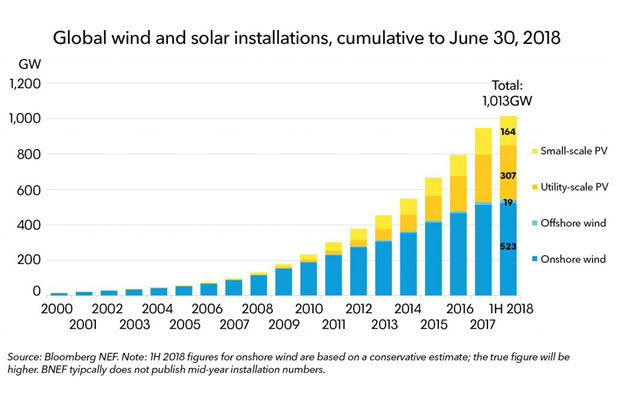 The world has attained the landmark figure of 1,000 GW of wind and solar generation capacity installed, as per the Bloomberg New Energy Finance (BNEF) report.

According to the BNEF estimation, second terawatt of wind and solar will arrive by mid-2023 and cost 46 percent less than the first.

Further, the new output from the research firm’s database shows that there were 1,013 GW of wind and solar PV generating capacity installed worldwide as of June 30, 2018. The 1TW milestone would have been passed sometime just before this date. The total is finely balanced between wind 54 percent and solar 46 percent.

The report further added that, “Looking back on the first terawatt of wind and solar reveals just how far these two sectors have come. Total installed capacity has grown 65-fold since the year 2000, and more than quadrupled since 2010.”

On the solar PV capacity installation, the report said, “Even more striking is the growth of solar PV alone. As recently as 2007, there was just 8GW of PV capacity installed, compared with 89GW of wind. Since then, PV has grown from just 8 percent of total installed wind and solar capacity, to 46 percent.”

In the process, PV installations grew 57-fold, with utility-scale PV overtaking small-scale PV in 2014. Wind still represents the majority of the installed base at 54 percent, but is likely to relinquish this lead soon, it added.

On investment, BNEF estimated that the first 1TW of wind and solar required approximately USD 2.3 trillion of capital expenditure to deploy. The second terawatt will cost significantly less than the first. Based on estimates from its New Energy Outlook 2018, capital expenditures on wind and solar generation will total about USD 1.23 trillion from 2018 to 2022 inclusive.

Tags: BNEF, International, market research, Solar PV, wind and solar
"Want to be featured here or have news to share? Write to info[at]saurenergy.com