Even with PV additions crossing the 100 GW mark for the first time, Solar commitments declined 24 percent ($ value) in 2018. 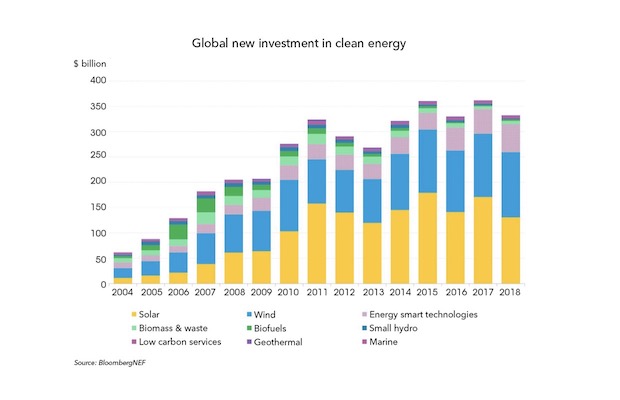 According to figures issued by research company BloombergNEF (BNEF), Global clean energy investment totaled $332.1 billion in 2018, marking the fifth consecutive year that investments crossed the $300 billion mark. However, investments in 2018 were down 8 percent year-on-year from 2017.

According to the report, the most striking shifts were in solar. Overall investment in the sector dropped 24% to $130.8 billion. Part of this reduction was due to sharply declining capital costs. BNEF’s global benchmark for the cost of installing a megawatt of photovoltaic capacity fell 12% in 2018 as manufacturers slashed selling prices in the face of a glut of PV modules on the world market.

That surplus was aggravated by a sharp change in policy in China in mid-year. The government acted to cool that country’s solar boom by restricting access for new projects to its feed-in tariff. The result of this, combined with lower unit costs, was that Chinese solar investment plunged 53% to $40.4 billion in 2018.

In the other sectors, there was a sharp contrast between clean energy sectors in terms of the change in dollar investment last year. Wind investment rose 3% to $128.6 billion, with the offshore wind having its second-highest year. Money committed to smart meter rollouts and electric vehicle company financings also increased, according to the report.

The biggest solar projects financed included the 800MW NOORm Midelt PV and solar thermal portfolio in Morocco, at an estimated $2.4 billion, and the 709MW NLC Tangedco PV plant in India, at a cost of about $500 million. “India is one of the countries with the lowest capital costs per megawatt for photovoltaic plants,” the report added.

Jenny Chase, head of solar analysis at BNEF, said, “2018 was certainly a difficult year for many solar manufacturers, and for developers in China. However, we estimate that global PV installations increased from 99GW in 2017 to approximately 109GW in 2018, as other countries took advantage of the technology’s fiercely improved competitiveness.”