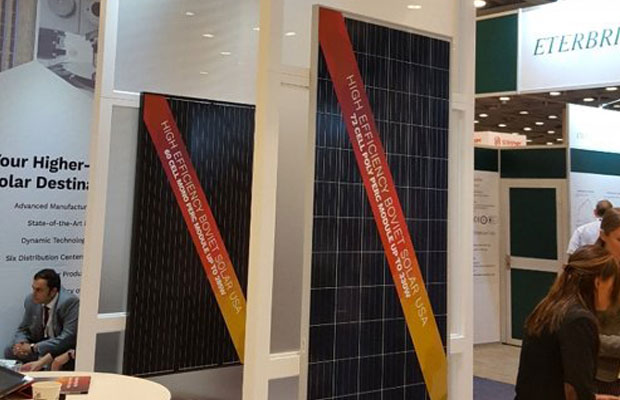 Boviet Solar USA has launched a new lineup of high efficiency solar modules for 2017. The new lineup of modules include 60-cell poly and mono modules, 72-cell poly and mono modules, PERC (Passive Emitter Rear Contact) modules, and a new rooftop solar module with built-in rail-less systems. The company will start shipping the modules in the first quarter of 2017.

Boviet’s new 72-cell polycrystalline PERC module offers power output from 330W to 335W, while 72-cell monocrystalline PERC module offers a power output from 340W to 345W. With PERC technology, a solar module can deliver up to 10 percent more power in a smaller PV footprint said the company in a statment. PERC panels are more efficient and come with the same effective lifespan and warranties as other modules, therefore delivering more power-per-dollar over the life of the solar array. Boviet polycrystalline modules deliver 97.5 percent of rated power capacity in year one and are guaranteed to deliver 80.7 percent power after 25 years.

Boviet also is introducing new triple black PERC 60-cell modules – black frame, black back sheet, and black PV cells. The new 60-cell PERC panels are rated for a power output of 280W to 290W for the poly version and 285W to 290W for the mono version.

To simplify rooftop installation, Boviet will also begin shipping a new 60-cell triple-black mono module with an integrated mounting system and power optimizer. Rated at 275-280W output, these new modules were developed in partnership with Spice Solar and SolarEdge and have built-in rail-less systems that enables these modules to be installed in less than half the time of conventional rooftop arrays.

“We are seeing more demand for high-efficiency modules, especially as the manufacturing cost of PERC n-type modules continues to drop,” said Eric Ma, PhD., President and General Manager of Boviet Solar USA. “Thanks to our superior engineering and manufacturing capabilities, Boviet is able to offer one of the most comprehensive lines of high-efficiency solar modules available. Our objective is to give distributors and installers the right product at the right price from a single supplier – Boviet Solar USA.”