Artha Energy Resources has announced that it has started expansion work on its 165 kW rooftop solar power plant in Aurangabad, Maharashtra. 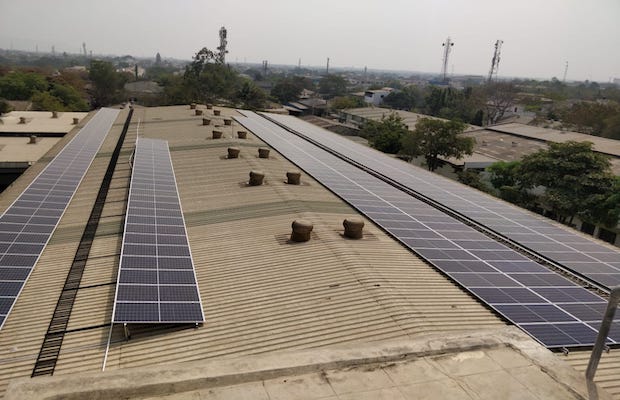 Artha Energy Resources (AER), a boutique investment bank and corporate advisory firm has announced that it has started expansion work on its 165 kW rooftop solar power plant in Aurangabad, Maharashtra. The current capacity of the solar rooftop power plant stands at 100.4 kW which has been active since February 2019 while 64.5 kW will now be added under the expansion project.

The expansion work for the solar rooftop project is for an Auto component manufacturer based in Aurangabad, Maharashtra and is expected to be completed by December 1, 2020.

As part of the expansion work Longi 430 Wp Half-cut Mono PERC Modules with Sungrow 50 kW inverter will be installed. Currently, at 100.4 kW the plant generates around 1.5 lakh units annually, with the completion of an expanded capacity of 64.5 kW it is expected to generate around 2.5 lakh units annually. With this new installation, the auto component manufacturer is expected to save around 17.5 lakh rupees per year considering a tariff of 7 rupees per unit.

Animesh Damani, Managing Partner, Artha Energy Resources said, “We are delighted to start the expansion work; it is a good feeling when a client comes back to you and wants to expand their solar capacity. This gives us a major boost in the quality of work we do and the output we promise to deliver to our clients. The expansion work is a testimony of how industrial units can utilise its space and save on costs by adopting solar. The addition of new capacity will help our client meet its growing demand for energy at the same time cut down on energy costs.”

By 2023 Artha Energy Resources aims to add around 30 MW of assets from solar. It owns few windmills in Rajasthan and Maharashtra. By the next couple of years, the firm aims to achieve 80 percent of its capacity coming from solar power. Ninety percent of its industrial project clients are from pharma, automobiles and FMCG while on the commercial front — hotels, malls and corporate houses of large companies form its clientele. Apart from rooftop solar, the firm is active in the operation of greenfield and brownfield projects as well.

According to Artha Energy’s calculations, post the expansion the power plant is expected to generate 2.5 Lakh units of electricity annually at maximum efficiency. This means that the expansion will cut down on 177 metric tons of Carbon Emissions annually. This offset is equivalent to planting approximately 886 trees a year.