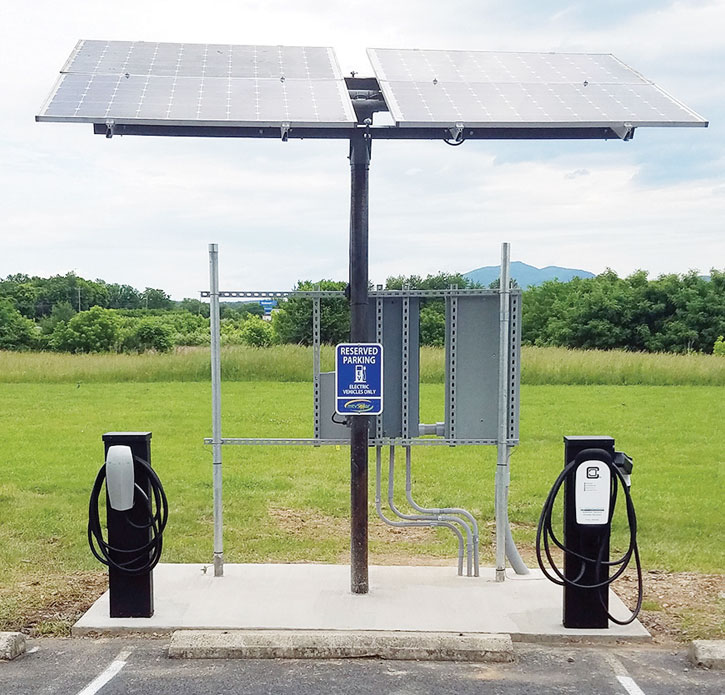 With the push to move to electric mobility at a national scale, and with the government being very enthusiastic about deployment of electric vehicles, the electronic industry can expect to see a lot of activity around indigenous development and manufacturing. While electric vehicles are being worked upon by major OEMs, an ecosystem for development of chargers, charging stations and software & cloud services is steadily being built. Established companies as well as various start-ups, have started working on these areas and results are starting to show.

However, there is still a lot of opportunity to make even better, the electronics side of it. The government, with the help of BIS, ARAI, EESL and other bodies, has already released technical specifications on charging stations and some of the original specifications like the AC-001 and the DC-001 have already been developed and charging stations have been deployed at select locations. The newer guidelines require the charging stations to be equipped with multi standard chargers, viz. AC Type 2, the CCS and the CHADEMO, in addition to the lower power AC and DC-001. However, these systems are reliant entirely on the grid, are subject to real estate availability at prime urban and semi-urban locations, and the question of the grid being ready and equipped for these added loads, still remains. This is where, solar energy and storage comes into picture to not only supplement the grid but to also work standalone at feasible locations across the country.

Fortunately, India has seen successful solar deployment and the abundance of solar energy due to its geographic location. The one-time installation and capital expense, works well for at least 20-25 years, with the return on investment, taken care of in a few years. The energy input henceforth, becomes virtually free. The subsequent sections will illustrate a feasible implementation that may be adopted to harness solar energy, store it and use it for EV charging. It will touch upon energy harnessing & storage schemes, distributed battery management, power conversion and connectivity, which are the basic building blocks for a modular, scalable, solar powered EV charging station. A typical solar EV charging station implementation is depicted through the diagram below. The major building blocks are selfexplanatory. 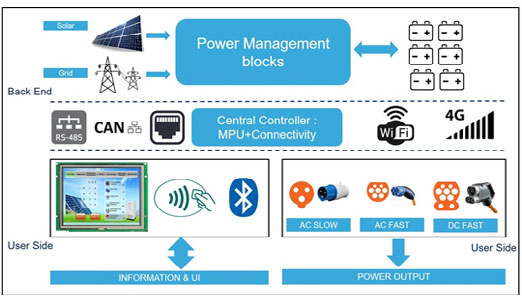 There is the user side, which basically depicts the functionalities visible to the end user. Information exchange and the user interaction is taken care of, here. It would typically consist of a TFT screen with touch sensing, NFC card readers for authentication or payments, and maybe also a Bluetooth interface for more advanced features.

The vehicle is physically connected to any of the output ports: AC slow charge for smaller vehicles and e rickshaws, AC fast charging for some classes of vehicles and of course, DC fast charging. The user has to authenticate himself, set his charge preferences and he needs to wait till the charge session is over. However, the more complex functions go on behind the scene, which are controlled and monitored by the central controller in conjunction with many different other modules.

Power flow and energy management: The system has 3 sources of power. First and foremost, are the solar panels. The sizing estimation is beyond the scope of this article, but, it is typically a few kilowatts at the minimum. A panel would typically produce at rated irradiance, about 150W/square meter. The solar panels feed the MPPT module. This is a DC-DC converter with a maximum power point tracking algorithm running inside it. These are typically very high efficiency units, running at excesses of 98% electrical efficiency. These are typically multiphase interleaved buck or buckboost converters, and operating levels are at a few hundred volts at both the input and output side. Isolation may or may not be a requirement, but most implementations are galvanically isolated for regulatory and safety reasons. The output feeds a common DC bus, from which downstream energy may be provided to the load. The implementation may be analog, fully digital or a mix of analog and digital control.

The second source is the grid. This may be optional, as the intent is to maximize the usage of solar. However, in areas where intermittent grid is available, or where the solar insolation is not entirely sufficient for operation year-long, or during certain seasons, grid helps in fulfilling the demand. Since the system is essentially a solar energy storage setup, it is also possible to use this station to supplement the grid, during peak hours or as a solar farm, using bidirectional grid tied inverters. With proper policies in place for exporting to the grid from solar farms or from captive plants with nett metering, this serves a dual purpose too.

The third source and the sink/storage, is the battery. The trend these days is to use Li Ion batteries which have very high cycle life, lends itself well to quick charging, very high depth of discharge and very high volumetric efficiency. It is possible to house these batteries underground, to save real estate. These Li Ion battery packs are arranged in a suitable series parallel combination, and in several strings. The batteries terminate themselves into a junction box and termination unit, which also functions as a supervisor. Each battery has a data port, typically CAN or RS485, and these are daisy chained and fed to this termination unit, which then has a top level view of the health and status of every individual battery, string or the entire battery bank. This is essentially a data concentrator and a switching unit, putting battery packs IN or OUT of circuit. In addition, this communicates with the central controller to decide the charge and discharge of the batteries.

The following diagram makes the power system architecture quite clear. This is a modular system, to allow for suitable expansion, and modules are typically expandable and 3-5kW each with a communication bus, typically CAN or MODBUS/RS485. The central controller is able to configure the modules as per the functional requirement at any point of time: be it charge management, be it load management or be it diagnostic checks. There is a provision within the controller to also monitor the energy usage, basically kWh consumed, kWh stored and kWh generated/exported. It can also communicate with industry standard energy meters for billing and tariff setting purposes. 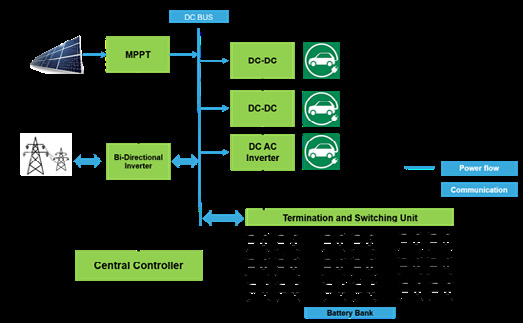 Figure 2: The power system architecture at the back end

The major power management blocks: The DC DC converter block is fed from the DC bus. Depending on the type of vehicle connected, and the demand raised by the vehicle BMS for the required voltage and current, the central controller configures the DC DC converter over the communication bus. This option is typically for DC fast charging, and multiple DC DC converter modules would work in tandem to fulfill the load. The DC AC inverter, is also fed from the DC bus, but this caters to vehicles which can only accept AC to charge or for general slow charging applications. The bi-directional inverter serves two purposes: It either feeds the DC bus to fulfill the demand or, it exports power back to the grid, when the charging station is lying idle or is needed to supplement the grid during peak hours. The key figures of merit for any power conversion block these days are:

Both of the above points are met with, using advancements in silicon. Wide band gap semiconductors, especially silicon carbide devices, are able to work at very high switching frequencies, at much higher junction temperatures and with higher efficiencies. In addition to this, there is an automatic reduction in the size of the passive components like magnetics and capacitors. Better magnetics materials also lend to smaller and low loss designs handling much higher powers.

The master central controller is the brain of the station. It performs functions starting from identifying and engaging the user/subscriber till ensuring the vehicle is charged in an optimal manner. It is a powerful combination of high performance computing, connectivity and sensing. The major functionalities are as

1) User ID and payment: This is the most visible functionality as far as the user is concerned. This is done through a smart card, an OTP, NFC enabled phones or even Bluetooth. All these sub systems are controlled by the MPU/MCU on board.

2) Power management: This is the most critical yet invisible part of the station. The system controller continually monitors the power scenario: supply and demand. Then it decides how to fulfill the demand, from the supply. Whether solar alone is able to supply the load, or is a combination of solar and storage is needed or it needs partial input from the grid as well. There may be scenarios, where there could be excess availability or excess demand. It is intelligent enough to route power correspondingly, by altering the settings of the various power blocks described above.

3) Connectivity: These days, stations and deployments need to be connected to the cloud for remote monitoring and control. It has to talk to the CMS (Central Management System) periodically, to report transactions, parametric, diagnostics and operational data. It also needs to take operational commands and settings from the CMS. So a multitude of connectivity options, both wired and wireless is provided. 3G/4G, Wi-Fi, Ethernet and even LoRa has been used for remote monitoring.

4) Protections, diagnostics and fault reporting: The system, in order to prevent malfunction, has very fast acting protection mechanisms that may be triggered by external events like surges or lightning strikes, or due to operational issues, accidental or deliberate misuse/abuse or from short circuits, over temperature or over voltage/over current conditions. To keep operational costs low and to have minimal downtime, systems are able to self-report issues that may arise from time to time. Modular build allows pin pointing which faulty section needs to be replaced at the field, so the technician can arrive well prepared. 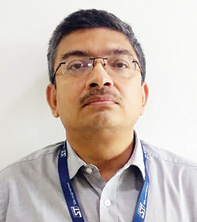 A brief explanation of how a solar EV charging system may be deployed, has been given above. Feasible working solutions and various sub-modules may be experienced at the STMicroelectronics India Development center in Noida, and it is possible to customize designs as per the needs of the OEM. E Mobility and EV charging infrastructure is one of the key focus areas and relentless research is being done to address high performances in all the functional blocks described above. End to end silicon for realizing realistic EV Charging stations, is available, along with many reference designs, to keep the time to market small.