Hero Electric, the market leader by sales in the electric two wheelers, has raised an investment of Rs. 220 Crore from a UAE-based financial services company Gulf Islamic Investments (GII), and an existing investor, OAKS investment partner. the funds will be deployed as Hero Electric seeks to make an impact in the crowded electric two wheeler segment, where firms like Ola Electric and Ather last week have announced major ramp up plans for 2021-22. 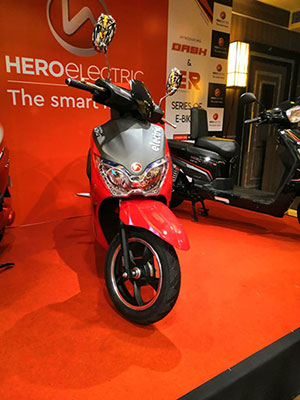 The firm is planning to sell around 1 million e-scooter units every year from now. Speaking of the investment, “This round of investments which is a first of a larger scheme will help expand our manufacturing capacities, increase R&D spends that will enable us to continue to launch innovative products to disrupt the category. Hero is committed to its mission of – No Emission and builds a sustainable electric future” said Naveen Munjal, managing director, Hero Electric.

“Hero Electric is exceptionally well-positioned to achieve multi-fold growth in the coming years,” states Pankaj Gupta, founding partner and co-CEO of GII. For GII, this investment in Hero Electric through its India Growth Portfolio II is an opportunity to expand its play in the country. “It is an important investment destination in the firm’s global strategy,” Gupta added.

Hero will join other  other electric two-wheeler makers like Ather Energy, Earth Energy EV, Ola Electric, Komaki, that have been aggressively increasing their manufacturing capacity as well as distribution reach in the country.

Some of the increase has been driven by changes in the incentives for electric vehicles. As the Department of Heavy Industries (DHI) has increased the demand incentives by 50 percent for the electric two-wheeler (E2Ws). Hence, the demand incentives for E2Ws have been increased to Rs 15,000 per kWh from the earlier uniform subsidy of Rs 10,000 per KWh for all EVs and hybrids, except buses. Hero’s MD, Mr. Naveen Mujal has accepted and appreciated the step taken by the DHI as he thinks it will give a better opportunity to the e-scooter makers for expansion and increasing their sales.

If we talk about the number of units sold, in March this year Hero Electric announced that it has sold over 50,000 electric two-wheelers in 2020 consequently retaining the top slot in the segment. The company also announced that its sales network has crossed the 600 touchpoint mark covering 500 towns and cities across the country.