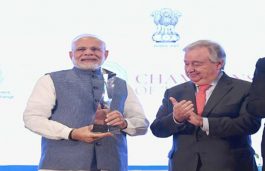 The award was already announced for PM Modi on 26th September on the sidelines 73rd UN General Assembly at New York City. In an encouragement to India’s enhanced approached towards the use of renewable energy, UN General Secretary, Antonio Guterres presented United Nations’ highest environmental honor, ‘Champions of the Earth’ Award to India’s PM Modi. […]