The award was already announced for PM Modi on 26th September on the sidelines 73rd UN General Assembly at New York City. 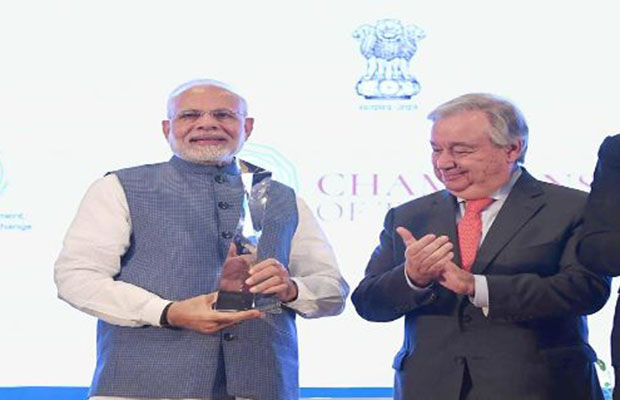 In an encouragement to India’s enhanced approached towards the use of renewable energy, UN General Secretary, Antonio Guterres presented United Nations’ highest environmental honor, ‘Champions of the Earth’ Award to India’s PM Modi.

The award was already announced on 26th September on the sidelines 73rd UN General Assembly at New York City.

Speaking at the award ceremony, Guterres said, “PM Modi recognizes climate change poses a direct existential threat to us. He knows what we need to do to avoid a catastrophe. Other leaders also recognize, know and understand, but the difference is that he not only recognizes but he acts.”

Moreover, the award has been conferred upon PM due to his leadership of the International Solar Alliance and pledge to eliminate single use plastic in India by 2022.

Further, awarded annually, the ‘Champions of the Earth’ prize is given to outstanding leaders from government, civil society and the private sector whose actions ‘has had a positive impact on the environment.’

Besides Modi, the award has been bestowed upon five other individuals and organizations.

Tags: award, India, ISA, UN General Secretary
"Want to be featured here or have news to share? Write to info[at]saurenergy.com