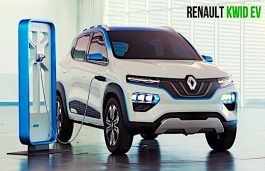 Renault is set to launch its Kwid EV that could fill the gap for an affordable, functional and aesthetic electric car in India. French carmaker Renault is bringing a new electric hatchback. Renault Kwid EV has already been launched in China as City K-ZE, and it costs less than $8,700 (Rs. 6,23,000). Its relatively cheap entry […]