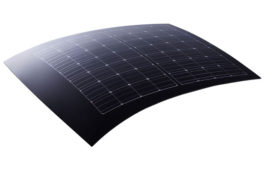 Panasonic’s newly developed “HIT Photovoltaic Module for Automobile” generates power and charges the drive and 12 V batteries Panasonic Corporation has announced that it has recently developed the “HIT Photovoltaic Module for Automobile”, which was adopted for the new Prius PHV released in February 2017 by Toyota Motor Corporation. In addition, Panasonic’s automotive prismatic lithium-ion […]