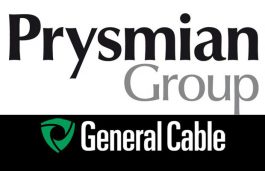 Prysmian Group (BIT: PRY) and General Cable Corporation (NYSE: BGC) announced that Prysmian has completed its acquisition of General Cable. Pursuant to the terms of the merger agreement entered into among the parties on December 3, 2017, Prysmian has acquired all the outstanding shares of General Cable common stock for $30.00 per share in cash. […]