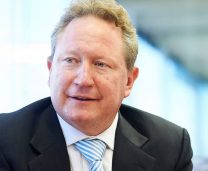 “Our organisations will be going like crazy because for us it’s a minimum $50 billion expenditure,” said Fortescue Metals Group’s billionaire founder Andrew Forrest this week while referring to a major agreement, as per which his Australian iron ore mining company will produce 10 million tonnes of hydrogen for German energy giant E.ON. Fortescue later […]

Australian iron ore magnate Andrew Forrest has announced that he is investing Australian Dollar $3 billion ($2.2 billion) in renewable energy in the island country. Forrest had announced previously that he will be investing big on a global green revolution. Most of the projects for RE will be coming up in the Central Queensland region. […]