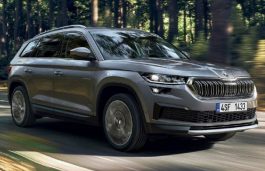 Skoda Managing Director Thomas Schäfer revealed new electric cars prospects of the firm. Skoda’s next three electric vehicles will be smaller than the Enyaq SUV and Enyaq Coupé. The new Enyaq Coupé iV is Skoda’s second model which is built on the Volkswagen Group’s electric MEB platform. As per earlier media reports, a smaller sedan-style car […]