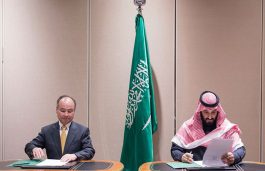 The projects are expected to create an estimated 100,000 jobs in Saudi Arabia and boost Saudi Arabia’s GDP by an estimated $40 billion annually. Saudi Crown Prince Mohammed bin Salman signed a Memorandum of Understanding with SoftBank CEO Masayoshi Son to create the world’s largest solar power generation company in Saudi Arabia. At a press […]