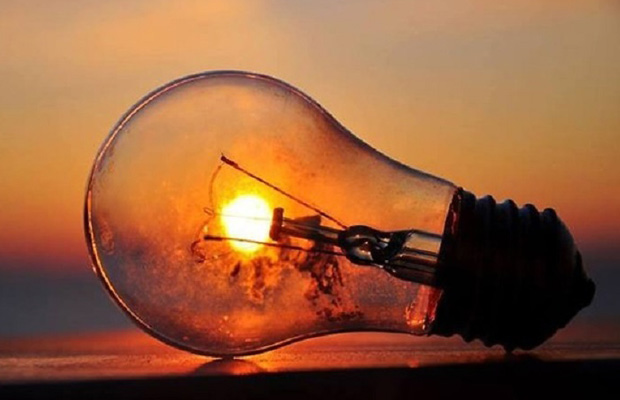 In view of the growing need of the Indian Economy, Government of India has embarked upon a massive programme to provide 24×7 power across the country by 2019. After the completion of half of its term, the Government has achieved many important milestones in the Power sector. Special focus has also been given to North East by giving approval to the North Eastern power system improvement project and comprehensive scheme for strengthening of transmission and distribution in the North Eastern States.

Several landmark decisions have already been taken in thermal power generation, hydel and more importantly in solar, wind and other green energy, besides strengthening of transmission and distribution, separation of feeder and metering of power to consumers.  These also include not only achievements in capacity addition but also important reforms being undertaken on increasing energy efficiency of the present infrastructure and thereby reducing power losses.

Due to large generation capacity addition, the electricity energy shortage in the country has reduced to 0.7%during the current year 2016–17 (up to October, 2016) from 8.7% during the year 2012-13. Adequate supply of the domestic coal to power plants has been ensured. The growth of domestic coal supply to power plants has been around 6.2% during 2015–16.

The government has launched a scheme by providing support from Power System Development Fund (PSDF)for operationalization of stranded gas based generation. The outlay for the support from PSDF has been fixed at Rs. 3500 crores and Rs. 4000 crores for FY 2015-16 and FY 2016-17 respectively.

Progress under Specific Schemes is given as under:

Under DDUGJY, projects with total cost of Rs. 42392.46 Crore for 29 States/UTs have been sanctioned.

Status of implementation of RE Component

Cumulatively (as on 30.11.2016), electrification works in 1,16,680 (96%) un–electrified villages, intensive electrification in 3,99,829 (67%) villages has been completed. Under DDUGJY, Government of India is providing free electricity connections to Below Poverty Line (BPL) households. Out of total 4.27 crore connections sanctioned, free electricity connections to 2.5 crore BPL households have been provided as on 31.10.2016 under the scheme. 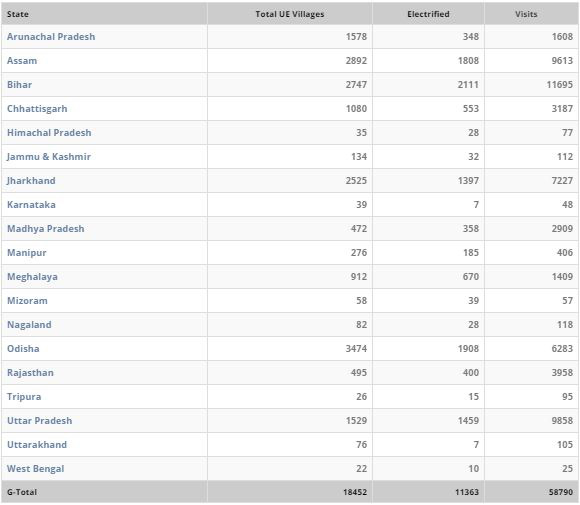 Penalty is imposed by the respective implementing agencies on the contractors, if the delay is attributable to the contractors as per extant rules. Multilevel monitoring mechanism has been developed at Central and State level.

A scheme to provide quality and reliable 24×7 power supply in the urban area. A total of 4041 towns have been found eligible under IPDS across the States, as on 24.11.16. The scheme provides to complete the projects within a period of 24 months from the date of issue of Letter of Award. The IT and technical intervention will help in improvement in billing and collection efficiency which will ultimately result in reduction in Aggregate Technical and Commercial (AT&C) losses. So far, 20 out of 21 Data Centres have been commissioned and 1246 towns have been declared ‘Go–Live’. All India Short Code ‘1912’ for Consumer Connect adopted in 44/51 Discoms in India.

A number of initiatives have been taken up by the Government to ensure promotion of energy efficiency in the country like Standards & Labelling programme for appliances by the Bureau of Energy Efficiency (BEE), Perform Achieve and Trade (PAT) Scheme, Energy Conservation Building Codes (ECBC), Unnat Jyoti by Affordable LEDs for All (UJALA) & Street Lighting National Programme (SLNP), Promotion of Energy Efficient Fans and Agriculture pump sets, among others.

The Unnat Jyoti by affordable LEDs for All (UJALA) scheme was launched to provide LED bulbs to domestic consumers aiming to replace 77 crore incandescent bulbs with LED bulbs. The e-procurement of LED bulbs through a transparent and competitive bidding process under UJALA has resulted in reduction of approximately 88% in procurement prices of LED bulbs from Rs.310 in February, 2014 to Rs.38 in August 2016, the retail price being reduced from Rs.550 to Rs.65, which is passed on to the consumers. A total of 5.96 crore of dwelling units have been provided LED bulbs under the UJALA scheme, as on 20.11.16.

Energy Efficiency Services Limited (EESL) has issued Secured, Redeemable, Taxable, Non–Cumulative, Non–Convertible Bonds in the nature of Debentures in dematerialized form of Rs. 500 Crores in the month of September, 2016 for the purpose of financing the various energy efficiency projects, which was fully subscribed. These Bonds are listed with Bombay Stock Exchange.

During the course of PAT Cycle – II, 621 units have been assigned specific energy consumption (SEC)reduction targets covering 11 sectors with projected savings of 8.869 MTOE. In the PAT – II cycle three more sectors have been included namely Railways, DISCOMs and Refineries.

Till September, 2016, a total of 3000 MW of inefficient thermal generating capacity has been retired.Measures initiated for reducing the generation cost of coal based power projects: Increasing supply of domestic coal; Coal usage flexibility; Rationalisation of coal linkages.

The Coal Mitra Web Portal, launched by Shri Piyush Goyal on 21st December, 2016, has been designed to bring about flexibility in Utilization of Domestic Coal by transferring the reserves to more cost efficient State/Centre owned or Private sector generating stations, leading to lower generation costs and ultimatelylesser cost of electricity for the consumers.

During the year 2016-17, 29 thermal stations, having total installed capacity of 13440.5 MW, are likely to be commissioned, out of which 9 projects with installed capacity of 3608.5 MW have already been commissioned till 31.10.2016. In-principle has been clearance given to replace 11000 MW Thermal Power Plants, older than 25 years, with Energy Efficient Super Critical Plants in about five years, with an investment of around Rs. 50,000 crores.

Scheme of Utilization of Gas based power generation capacity

The government has sanctioned a scheme for importing spot Re–gasified Liquefied Natural Gas (RLNG) in 2015-16 and 2016-17 for the stranded gas based power plants as well as for plants receiving domestic gas up to the target Plant Load Factor (PLF) selected through a Reverse e–bidding process. The scheme provides for financial support from PSDF (Power System Development Fund). The outlay for the support from PSDF has been fixed at Rs. 7500 crores (Rs. 3500 crores and Rs. 4,000 crores for the year 2015–16 and 2016–17 respectively).

The existing (FDI) policy notified in June 2016 by DIPP for FDI in Power Sector provides for 100% FDI under automatic route for projects of power generation (except atomic energy), transmission, distribution and trading. Government of India has also allowed the FDI up to 49% in Power Exchanges registered under the Central Electricity Regulatory Commission (Power Market) Regulations, 2010, under the automatic route, subject to certain conditions, as laid down in the policy.

Target of one nation–one grid–one frequency–one market–one price has been achieved through reforms, unbundling of the utilities, improved inter-state transmission capability, corresponding increase in generation capacity etc. On 29th December, 2015, a single pan–India price at Rs. 2.30 per unit for power was discovered in the power exchange platform. 50,215 ckm transmission lines and 1,28,403 MVA sub–station capacity added during 2014-16.

Available Transfer Capacity of Southern Grid has increased to 5900 MW (i.e. by 71% in 2014-16) due to addition of a number of transmission lines. The ATC would be further enhanced by 625 MW by December 2016 with the commissioning of 765 MW at Angul–Srikakulum–Vimagiri line.

Ujwal DISCOM Assurance Yojana (UDAY), a scheme for financial and operational turnaround of Power Distribution Companies was formulated and launched by the Government on 20th November, 2015 in consultation with the various stakeholders. The scheme aims to provide permanent solution to legacy debts of approximately Rs.4.3 lakh crores and address potential future losses.

As on 08.12.2016, 17 States of Jharkhand, Chhattisgarh, Rajasthan, Uttar Pradesh, Gujarat, Bihar, Punjab, Jammu & Kashmir, Haryana, Uttarakhand, Goa, Karnataka, Andhra Pradesh, Manipur, Madhya Pradesh, Maharashtra, Himachal Pradesh and the Union Territory of Puducherry have signed Memorandum of Understanding under UDAY. The Government of Telangana has not signed a MoU under UDAY so far.

In order to facilitate such States that want to join but could not join UDAY, the Government of India has now decided to extend the timeline to such States up to 31.03.2017. So far, Governments of Rajasthan, Uttar Pradesh, Chhattisgarh, Jharkhand, Punjab, Bihar, Haryana, Jammu & Kashmir and Andhra Pradesh have issued Bonds to the tune of Rs. 1,82,204.29 crore including Bonds issued by Rajasthan DISCOMs worth Rs.12,368.00 crores and by UP DISCOMs worth Rs. 10,714 crores.

A Multi–Level Monitoring mechanism for Ujwal DISCOM Assurance Yojana (UDAY) has been put in place to ensure a close monitoring of performance of the participating States under UDAY. Also a web portal (www.uday.gov.in) has been created for monitoring purpose. The last meeting of the Monitoring Committee was held on 03–11–2016.

National Smart Grid Mission (NSGM) was launched on 27th March 2015. Funds allocated for NSGM were Rs.40 Crore & Rs.30 Crore for the years 2015–16 and 2016–17 respectively. Smart Grid Projects at Chandigarh for Rs. 28.58 crores, at Amravati (Maharashtra) for Rs. 90.05 crores, at Congress Nagar (Nagpur) for Rs. 139.15 crores and at Kanpur for Rs. 319.57 crores have been sanctioned under NSGM. The National Smart Grid Mission Project Management Unit (NPMU) is handholding States for speeding up development of Smart Grid Network in the country.

The Union Cabinet approved proposal for amendments in the Tariff Policy on 20.1.2016. Resolution issued on 28.1.2016. It will provide the motivation to harness the hydro as well as renewable capacity for energy security of the country.

Main amendments are as under:

Mobile applications and websites launched to ensure accountability and transparency