Home » News » With Approval In From Indonesia, Sun Cable Expands Project By 20 GW

With Approval In From Indonesia, Sun Cable Expands Project By 20 GW

Sun Cable, promoted as the world’s largest single PV and battery storage project has expanded its project size further. The project, which seeks to build massive solar power plants in Australia along with storage capacity to supply to Singapore via undersea cables, has added 20 gigawatts for the solar component and 36-42GWh of battery storage.

Started off by billionnaire founders Andrew Forrest and Mike Cannon-Brookes as a 10 GW solar and 20 GW storage project called the Australia-Asia PowerLink (AAPowerLink), it was recently expanded to 14GW of solar and 33GWh of battery storage. The latest increase takes it to 34 GW of Solar and 66 GW of storage now.

The firm announced this while informing that it has been granted a sub-sea survey permit by Indonesia, whose waters the sub sea cable will pass through.

The high-voltage direct current cable, which would also be the largest of its kind in the world, aims to transmit renewable energy from Elliott in the NT, to Darwin, and then to Singapore, where it is estimated the project could supply up to 15% of Singapore’s electricity needs, starting from 2028.

The new project size makes it a  $A30 billion  project that SunCable claims will position Australia as a clean energy exporter with up to $A2 billion in exports each year from 2028.

“This is a significant milestone for the AAPowerLink and brings us closer to generating and transmitting affordable, dispatchable renewable energy to Darwin and Singapore, via the world’s largest renewable energy transmission network,” said Sun Cable CEO David Griffin in a statement.

“We are developing the technology that integrates solar, storage and High Voltage Direct Current (HVDC) transmission technologies, to meet the large-scale demand for renewable energy”.

Cannon-Brookes said ” Australia can become a renewable energy superpower. We can and should tap into our solar resources that could power the world five times over. Sun Cable is harnessing this at scale, and its Australia-Asia PowerLink will create massive local and international renewable energy opportunities.”

The new focus on Green Hydrogen actually means that the SunCable project may not even depend on Singapore for exporting its energy, if it comes to that. Massive renewable capacities could be created by 2028 to serve green hydrogen energy needs, assuming that the technology progresses well enough to make processing at scale viable. 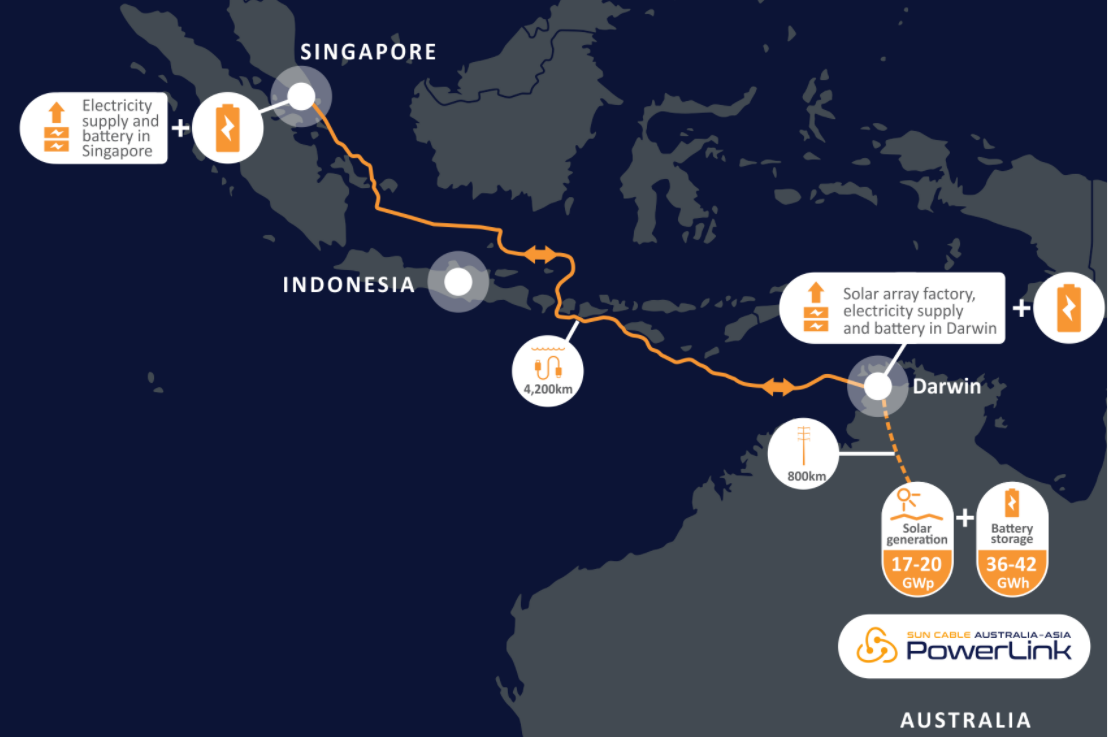