The National Solar Energy Federation of India (NSEFI), one of the leading industry bodies for the sector with a high developer presence, has launched the “Ghar Ke Upar Solar is Super” Pan-India Rooftop Solar Awareness Campaign. Starting with Bidar in Karnataka, the campaign was launched by Union Minister of State, MNRE Bhagwant Khuba along with Karanataka Energy Minister V Sunil Kumar

Launched on June 4, the event is supported by MNRE, and plans to cover 100 cities in 3 years.

Although led by NSEFI, the pan India solar rooftop campaign is also supported by National Thermal Power Corporation(NTPC), Karnataka Renewable Energy Development Limited (KREDL) and GESCOM. NSEFI has also found key backers in the German Solar Association (BSW) and the German Federal Ministry of Economic Cooperation and Development (BMZ) under the Sequa KVP Programme. The focus of the campaign will  be tier 2 and 3 cities and towns across India. “GHAR KE UPAR SOLAR IS SUPER” will aim at mobilizing local government, citizens, RWAs, Lions/Rotary/Lioness Club, and Municipalities to spread awareness of Solar Rooftop primarily.

To fill in for information gaps that exist when it comes to rooftop solar, NSEFI has also launched a Toll-Free number 1800-1-217-217 so that interested people can get in touch with representatives and get answers to all their queries and get Rooftop Solar installed.

Pranav R Mehta, Chairman, NSEFI, said that “Solar Energy is an ocean of opportunities for the youth of our country and for everyone. Rooftop Solar will greatly serve the cause of Global Warming & Climate Change by involving the people.
Without the involvement of people, no big idea can succeed. Rooftop Solar affords an opportunity to the common person to make his contribution towards Global Warming & Climate Change.” 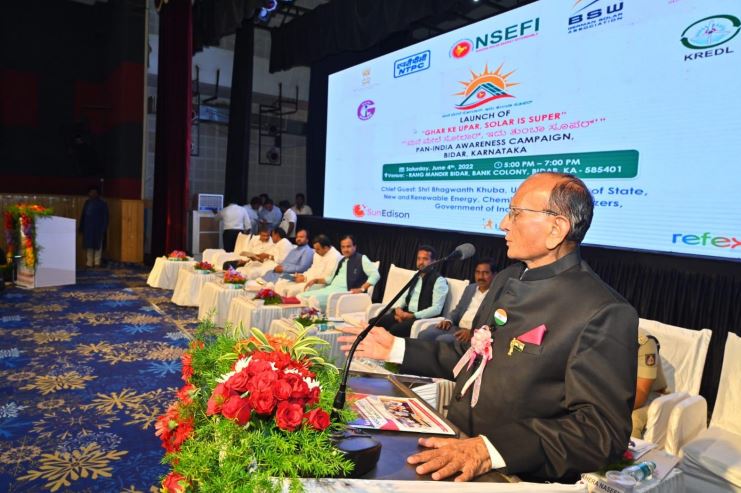 The idea for, and the targeting of the campaign seems spot on, considering that vast potential, interest and need for solar rooftop adoption across the country. At SaurEnergy, we see it everyday in the calls, emails and messages we receive from people across the country who are interested in a solar rooftop set up. In fact, the interest is almost as old as this site. Unfortunately, follow ups with the very same people has also brought home to us the many challenges that remains when it comes to a solar rooftop connection in the country. While states like Gujarat have really cleaned up the process, too many major states are stuck in a time warp, making users chase paper trails and dead ends before their rooftop connection moves ahead. A quick look at the story as captured by us over the years will show you the extent of the challenges rooftop solar has been facing.

That have created space for all sorts of firms to sell the rooftop dream to people, cheating many along the way with poor set ups, massively delayed installations and of course, cases where they have simply disappeared after collecting advances.

That the countries top 20 cities, all of which are well placed for solar rooftop, do not generate even 5% of their power requirements from solar rooftop is a tragedy, at a time when energy shortages loom, with coal fired power still the most viable option.

MNRE’s nationwide portal to simplify the rooftop application process in the country is still awaited.

One certainly hopes more and more state governments will also step up to champion solar rooftop as it should be, for without strong local backbones and support, the project will remain a challenge. 7 GW capacity after a decade of solar is a very poor advertisement for our intent and ability to push this key aspect of solar power. While discoms have to shoulder a huge part of the blame, it is a fact that much more can be done tat is still in the works. Lets hope that the campaign will not only clear the fog around solar for potential users, but also for policy makers as feedback comes in thick and fast.