A surge in Chinese offshore installations has pushed global wind capacity additions to nearly 100 GW for 2021, according to new research from Rethink Energy. Hitting 92.5 GW for the year, the figure surpassed expectations of 86.4 GW, despite additions falling by 25% compared to 2020.

The findings are set out in a new report called Global Wind Power Forecast – entering boom phase by 2025, published today.

Overall, China accounted for a leading 51% share of global wind additions, followed by the USA (15%), Brazil (4%), Sweden (2%), and Turkey (2%). European nations accounted for just 18% in their entirety, with strict planning requirements plaguing the onshore sector, with the EU-27 installing less than half of what should have been installed to stay on track with its Fit-for-55 decarbonization plan. All but two European nations actually saw a decrease in annual installations. 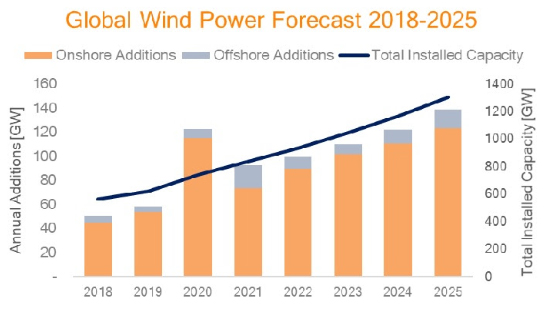 With more dependence on government-related planning restrictions, as well as prices for commodities such as steel, the wind industry has not grown as consistently as solar. While additions have risen at a CAGR of 8.5% over the past 10 years, there have been five cases where there has been a decline in global activity in successive years.

For 2021, representing the second largest year for annual additions, the 25% dip in installations is largely a result of a flurry of activity in China at the end of 2020; project developers in the country rushed to get projects online ahead of subsidy deadlines at the end of January 2021.

“Despite a 34% drop in overall Chinese additions, it was this same dynamic, replicated in the offshore wind sector, that has once again pushed China to market domination in 2021”, says Harry Morgan, Rethink Energy’s wind power analyst and lead author of Global Wind Power Forecast – entering boom phase by 2025.

“Accounting for 36% of the country’s new capacity, in one year, China managed to install more offshore wind capacity than the rest of the world has in the past five years combined. Bringing China to 27 GW of offshore wind capacity in total, it has now blown the UK’s market lead out of the water – with the UK sitting on just 11 GW”, he says.

Activity across both onshore and offshore segments sees the global wind power capacity rise to 836 GW, with 39% of this sitting in China’s territory –2.5-times more than its nearest competitor, the USA.

This means than wind power now accounts for 11% of global power generation capacity (in GW), with total generation (in GWh) growing 5-fold to now account for 8% of overall supply.

In a year of soaring commodity prices and logistical costs, turbine OEMs and developers have battled tight margins to surpass their expected production capacity growth. Of the OEMs, Vestas regained its crown as the leading supplier – accounting for 16.4% of the market – ahead of China’s Goldwind (13.0%), Siemens Gamesa (9.3%), Envision (9.1%), and General Electric (9.0%). GE fell from the top spot in 2020, with its installations in its home US market falling by 22% year-on-year.