Home » News » We are Looking for Exponential Growth in India: Growatt’s Rucas Wang

We are Looking for Exponential Growth in India: Growatt’s Rucas Wang

The company also said that the inverter’s efficiency can reach up to 99 percent and can produce higher yields for investments. 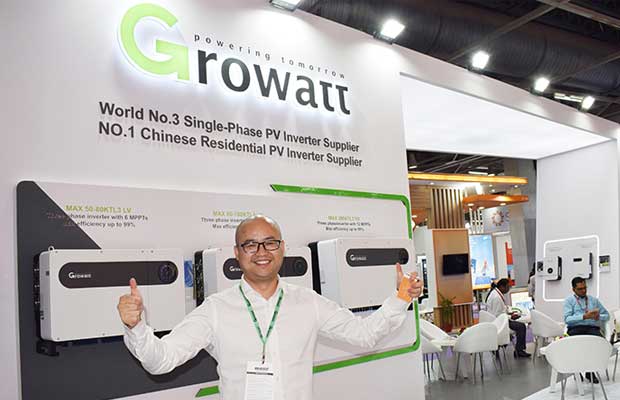 China-based PV inverter maker Growatt has showcased its wide range of inverter offerings during the Renewable Energy India (REI) Expo, which had the biggest annual gathering of the Indian solar industry, held in Greater Noida, India.

At REI 2019, solar manufacturers from across the world came to join the event with their latest photovoltaic (PV) solutions, including Growatt, which had displayed it’s new solar inverter models. These models were catching the eyes of visitors from the solar industry.

On the MAX range of inverters, the inverter manufacturer said that these inverters have powerful quad-core architecture and have an excellent performance in system protection, monitoring, one-click diagnosis, and other smart functions.

Further, its 200kW MAX inverter has 12 MPPTs and can meet the demand of flexible system design in complex scenarios.

The company also claimed said that the inverter’s efficiency can reach up to 99 percent and can produce higher yields for investments.

Besides, it’s newly launched C&I inverter has three MPPTs that would fit C&I rooftop solar plants, as it has a compact design and is lighter as compared to other C&I inverters, the company said.

Its OLED display and touch button make it more appealing to end-users, providing a better experience.

On the future expectations from India business, Wang confidently and optimistically said that “we have a wide range of inverter offerings and brand new up-to-date inverters have been introduced into India. In addition, we have a big team in India. By far we have over 15 local service engineers with support from senior service engineers from headquarters in Shenzhen, and thus our service capability has been significantly improved. With such a strong foundation, in the near future, we are looking for exponential growth in India!”