“The module is apt for both commercial and residential projects, especially when space allocation is a challenge,” Rathi added.

Country’s one of the leading PV module maker and EPC services provider, Waaree Energies has launched a series of next generation solar modules called Super 400 in India. 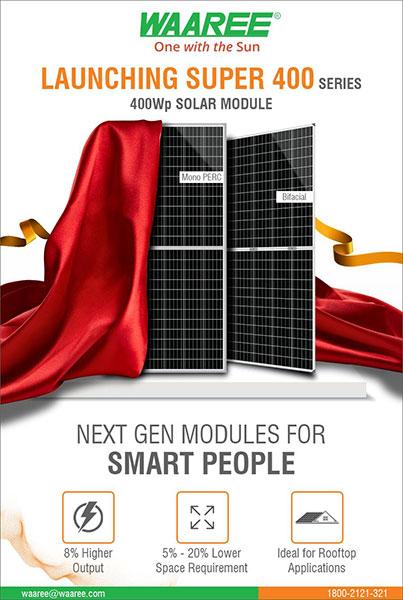 The company claimed that this is the country’s first 400 Wp cut cell module series which is touted to be the future of rooftop solar.

It’s Super 400 series with Mono PERC modules is generating output of 400 Wp, while it’s Super 400 Pro Module is a Bifacial module with up to 30 per cent higher output.

Moreover, in the case of partial shadow these modules can generate more than 50 per cent higher output as compared to regular best-in-class modules.

Besides, these modules will be having a life span of minimum 25 years with maintenance & service facility from the company itself.

Commenting on the launch, Waaree Energies, Director, Sunil Rathi said, “Waaree believes that the best way for India’s transition towards a solar reliant country is to promote rooftop solar adoption and maximize output in rooftop projects. Super 400 is a one-of-a-kind doublet module with 400Wp capacity that is aimed at providing higher energy output in such projects.”

“The module is apt for both commercial and residential projects, especially when space allocation is a challenge,” Rathi added.

Additionally, these solar modules require 5 per cent to 20 per cent less installation area and provide 8 per cent higher output as against various best-in-class modules available in the market.

On the back of significant potential in these new modules, the company is expecting an exponential growth trajectory in FY 2019-20.

Recently, the company, which is having 1.5 GW manufacturing plant in Gujarat, has set up 14 solar power centers in West Bengal.

The main objective of these centers, spread over 14 districts, is to make inroads into solar projects segment.