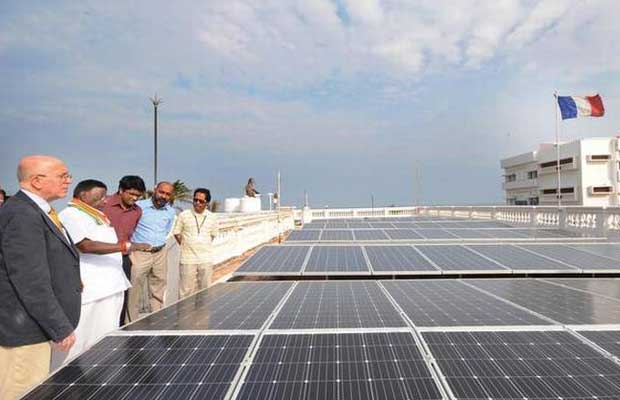 Inauguration done by V. Narayanasamy (Chief Minister of Puducherry) with the renovated reception hall of the Embassy can be completely lit by sunlight alone. Apart from replacing LED lights in the hall, the architects have constructed surfaces on the pillars that can bounce light back to the ceiling and diffuse it lighting up the entire central hall.

French Consul General in Puducherry Philippe Janvier Kamiyama said that as per an energy audit carried out in 2015, the embassy building fulfils the criteria for a five star rating, the highest level of certification of energy efficiency given by Bureau of Energy Efficiency (BEE).

Inspired by the United Nations Conference on Climate Change held in Paris during December 2015 (known as COP 21), the Embassy of France in India decided to implement several projects to make the Puducherry Consulate building environment friendly during the year 2016.

“Since mid-July, the solar plant has produced more than 33,000 units of power thus saving more than ₹2.3 lakh,” Kamiyama said. He added “The continuous technical improvements and change in user habits over more than a decade are bearing fruits for making this consulate a very environment friendly building. While this building consumed 53,358 units of power in July 2002, the bill for July 2016 shows 16,889 units, a reduction of more than 68%, an indicator of all the efforts undertaken both in the domains of conservation and production.”

“We are glad to achieve this phenomenal milestone in Puducherry. The impact of the solar energy initiative is observable and quantifiable. The heritage building of french consulate of Pondicherry absolutely lit by sunlight . This project reiterates our commitment towards bringing the latest and the best technology in solar industry for sustainable development in the renewable energy sector of the country. I congratulate team Waaree for making this possible”, said Hitesh Doshi, Chairman and Managing Director, Waaree Energies Limited