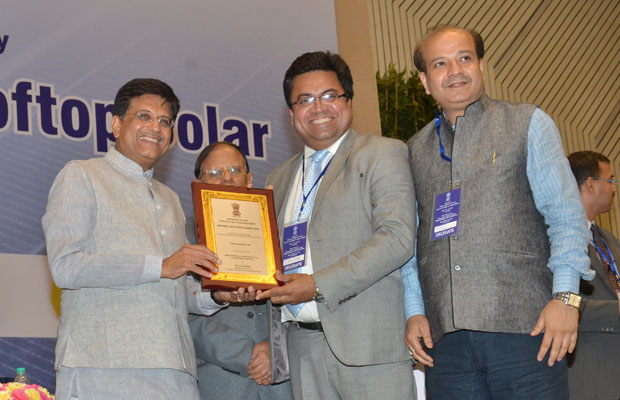 The Award was presented by Piyush Goyal, the Minister of State for Power, Coal and New & Renewable Energy at the National Workshop on Roof Top Solar Power at Vigyan Bhavan, New Delhi.

Speaking on the ocassion Gyanesh Chaudhary, CEO and MD, Vikram Solar said “We are proud to be recognised by the Government of India for our efforts in contributing to India’s Solar Mission. As a leading domestic manufacturer, we consider it our responsibility to drive excellence in manufacturing and contribute to India’s solar story by providing highest quality products and services.”

Vikram Solar commissioned many prestigious rooftop projects in the past year. The company designed, engineered, and commissioned a 2 MW plant at Netaji Subhash Chandra Bose Airport in Kolkata, executed a 750 kWp solar plant at Calicut International Airport and a project at St. Xavier’s college in Kolkata.

Ivan Saha, President and Chief Technology Officer, Vikram Solar said “This recognition by the Government of India is a motivation for us to excel further and set new benchmarks in the industry. As the Indian solar industry grows and technology evolves, focus on quality will have to increase. We always believe that good quality modules are critical in determining the bankability of a solar project.”