The US solar market has surpassed the 100 gigawatts (GWs) of installed electricity generation capacity, which marks the doubled size of the industry over the past 3.5 years, says a report entitled ‘U.S. Solar Market Insight Q2 2021’.

According to the report released by the Solar Energy Industries Association (SEIA) and Wood Mackenzie, the solar capacity in the US has accounted for 58 percent of the total electricity generation in the first quarter of the fiscal year 2021 (Q1FY21). Additionally, the report claims that the US had generated almost 100 percent of its electricity through Renewables. 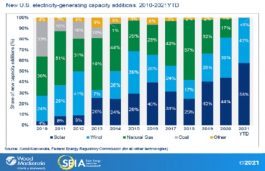 Will 2021 be The Year Solar Saves California?
Also Read

However, the commercial solar and community solar volumes declined from Q4 2020, as is typical for these market segments. Commercial solar increased 19 percent over Q1 2020 and community solar declined 15 percent from Q1 2020. A total of 6.2 GW of new utility-scale solar power purchase agreements were announced in Q1 2021, on par with Q1 2020. The total utility-scale contracted pipeline has grown to nearly 77 GW, reported by SEIA and WoodMac.

Wood Mackenzie calculates that the solar industry will continue to break annual installation records every year for the next three years before the investment tax credit (ITC) fully phases down under current law. Another 160 GW of capacity will be installed between 2021 and 2026 to accompany today’s current operational fleet of over 100 GW. This will bring the total operating PV fleet to over 250 GW by the end of 2026.

The report highlighted the US prez Biden’s infrastructure plans that boosted solar;

In late March, President Biden published The American Jobs Plan – a sweeping plan to upgrade the nation’s infrastructure while creating jobs. The most important parts of the plan for the solar industry include extending the ITC and expanding the credit to include direct pay, extending the production tax credit, incentives to build out the transmission grid, and a target to make the electric sector 100 percent carbon-free by 2035.

Among all, Texas has topped the installed solar capacity chart of the US solar market with 1.52 GW of new solar capacity in Q1, more than it added in all of 2019 and three times more than any other state. Indiana, Virginia, Michigan, and Iowa were among the top 10 solar states this quarter.

Concluding the report, the author also stressed the rising costs in the solar industry and helps to explain the dynamics at play. While average solar system prices remained relatively stable from Q4 2020 to Q1 2021, key inputs for solar modules and installations, including polysilicon, steel, aluminum, semiconductor chips, copper, and other metals, are facing supply constraints. Compounding cost increases across all materials started at the end of Q1 and are beginning to affect installers now.