Wood Mackenzie has revealed in its new research that the American community solar market will continue to grow over the next five years, with at least 7 GWdc of community solar expected to come online between 2022-2027.

Wood Mackenzie has increased its 2022-2026 forecast by 477 MWdc, a relative 11% uptick when compared to former forecasts and extended its outlook to 2027. This rise can be attributed to the addition of new community solar markets, like New Mexico and Delaware, as well as modifications to existing state forecasts as state-level programs are expanded and rules updated. 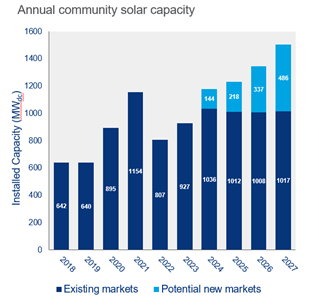 Illinois and New York report the greatest state-level changes to the forecast. New York is expected to continue being the leading community solar market, with 1.3 GWdc coming online between 2022-2027.

“The community solar industry is a growing solar segment within the US, with several proposed new programs pending in state legislatures. Since the start of Q2 2022, 4.4 GWdc has been installed nationally and we expect to see more growth over the next five years as legacy markets expand their community solar programs and new states adopt community solar programs,” said Rachel Goldstein, US Solar Research Analyst for Wood Mackenzie.

In the research report, Wood Mackenzie and CCSA have found that costs to acquire large customers are lower, but more variable, on a per watt basis than acquisition costs for residential customers.

USA To Give $56 Million For Solar Manufacturing & Recycling
Also Read

Wood Mackenzie findings have also highlighted that community solar-plus-storage can provide grid flexibility, but regulatory models do not currently recognize how these projects can manage load in the USA.

“Community solar-plus-storage could help manage the load on the distribution and provide grid flexibility, but so far, its scope is limited to a few states, and current rules do not necessarily value storage for its grid resilience capabilities,” Goldstein added.

In Massachusetts, there is a requirement for SMART-qualifying facilities greater than 500 kilowatts (kW) to be co-located with storage, while New York’s Value of Distributed Energy Resources (VDER) offers financial incentives for co-locating community solar with storage.

Wood Mackenzie also held that at present, community solar has begun to capture the imagination of people in a third of states. The Joe Biden Administration wants community solar to reach 5 million households by 2025 and create $1 billion in energy bill savings.