The company spokesperson when contacted said that, the solar plant will be erected in line with global renewable energy standards and will be able to derive optimum performance with hassle free operation. 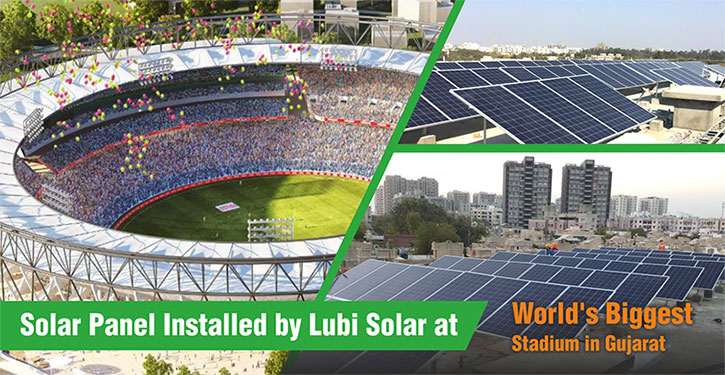 After complete demolition in late 2015, the Sardar Patel Stadium in Ahmedabad is currently under redevelopment and an overhaul phase.

With an aim to utilize sustainable power at all levels, a solar power plant is also under construction in the stadium premises with its redevelopment.

Lubi Solar, which is a division of Lubi Electronics, will be responsible for the supply and commissioning of this proposed rooftop solar power plant.

Furthermore, this power house will be equipped with the solar panels manufactured at the company’s manufacturing facility in Gandhinagar.

The company spokesperson when contacted said that, the solar plant will be erected in line with global renewable energy standards and will be able to derive optimum performance with hassle free operation.

Additionally, the project has a sanctioned load capacity of around 4 MW with a proposed backup of around 3 MW, the spokesperson added.

Using renewable energy sources to power key utilities in the stadium is expected to take out load on the traditional power suppliers, at the same time ensure the facility to access clean and cost effective power.

This world class multifacility stadium is being redeveloped by Larson & Toubro and is expected to complete around end of this year.

Meanwhile, the stadium, which spreads over 63 acres of land, has been designed to manage huge crowds, with parking areas capable of handling around 3,000 cars and 10,000 two wheelers.

The stadium will also house four dressing rooms, a clubhouse equipped with 55 rooms and a huge swimming pool.