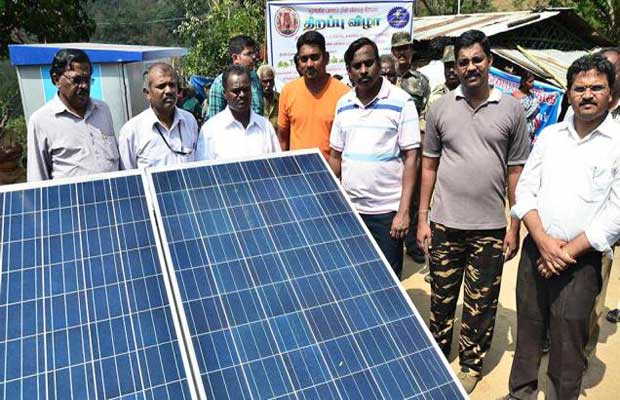 Known to be the most remote village of Dindigul district (Tamil Nadu) gets a mini-grid solar power station enlightening the first spark of electricity in all the houses.

Commissioned at a cost of Rs. 3.78 lakh by Selco India, Moongilpallam village’s solar station has sufficient capacity to supply electricity for the next five years.

Additionally, two LED lamps – one inside and another outside the house – and a mobile charger facility have also been integrated in each house. Initially, 23 houses have been provided lighting and remaining five houses will be hooked to the solar station in a few days.

Inaugurating the station at the village, South Zone IG S. Murugan said that the facility would throw new light in the lives of tribal people. They should educate their wards for economic development.

Kodaikanal Revenue Divisional Officer N. Suresh said that a radio set had been given to all households, as a first step to connect them with the outer world. He distributed ration cards and old age pension to them at the function.

Lead Bank Manager N. John Nelson said that funds were granted for installation of solar lighting in 28 houses. Divisional Manager G. Murugesan said that the Canara Bank had contributed Rs. 2.11 lakh under its corporate social responsibility initiative for the project.