UNFPA is additionally partnering with the UN Refugee Agency to deliver solar street lights to the settlement. 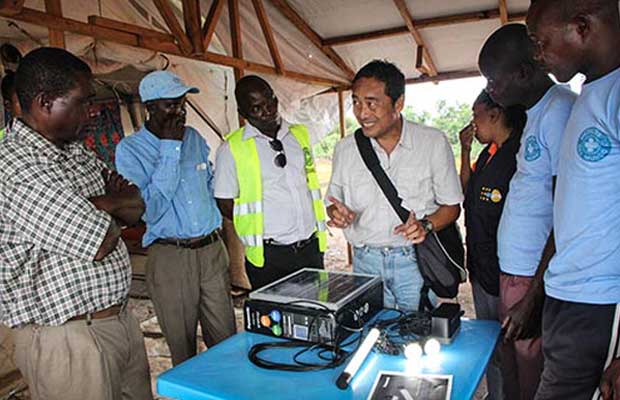 UNFPA is working with the Japan International Cooperation Agency to provide 50 solar-powered units to community centres, medical facilities and other communal spaces in the Lóvua refugee settlement.

The units, donated by Panasonic, consist of a solar panel, three LED lamps, and a rechargeable battery that can also be used to charge mobile phones.

Yuzo Kitamoto, deputy representative for the Japan International Cooperation Agency in Angola, said, “We hope these solar lamps can be installed in public facilities to be able to extend the services and provide light in the dark.”

Women and girls arriving in Lóvua are also receiving solar-powered torches, part of the dignity kits that are a standard part of UNFPA’s humanitarian response.

According to UN reports, nearly 35,000 refugees have poured into Angola’s Lunda Norte Province.

UNFPA is additionally partnering with the UN Refugee Agency to deliver solar street lights to the settlement. And in partnership with Médicos del Mundo, UNFPA has set up women-friendly spaces, where women and girls can rest, socialize, and learn where to receive reproductive health services and help for survivors of gender-based violence.