The UN is very appreciative of India’s gift of solar panels to it, a spokesperson for the Secretary-General has said, as the organisation faces a severe liquidity crisis 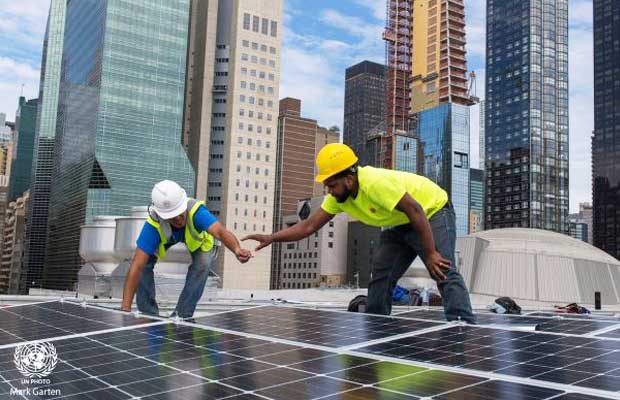 The UN is very appreciative of India’s gift of solar panels to it, a spokesperson for the Secretary-General has said, amid suggestions that their energy can be used to run escalators in the world body’s headquarters that have been partially shut as part of austerity measures implemented due to a severe liquidity crisis at the organization.

The United Nations is facing a “severe liquidity crisis”, reaching its deepest deficit of the decade. Several emergency measures have been put in place by the world organization to tide over the financial crunch. Official travel will be limited to the most essential activities, air conditioning, and heating in the UN Secretariat has been reduced outside official working hours and catering facilities are being operated with reduced hours.

“The issue with the escalators, as we pointed out, is an issue having to do with our budget. We are using solar panels. As you know, India had donated that, and we’re very appreciative of the donation. But when it comes to our cost-cutting measures, we’ll keep reviewing them and probably bring more services online once the money comes in,” Farhan Haq, deputy spokesman for the Secretary-General, said at the daily press briefing, in response to a question.

Secretary-General Antonio Guterres’ spokesperson Stephane Dujarric was asked about the escalator situation last week and a suggestion was made that the energy generated from the Gandhi Solar Park, installed on the roof of the UN Headquarters, can be used to power the escalators. On the suggestion that energy from the solar panels could be used to power the shut escalators, Dujarric had said that “I don’t think I’m an electrical engineer, but I will see where that electricity goes.” In response to a question, Dujarric had said that the UN was saving about USD 14,000 a year by keeping the escalators closed.

The Gandi solar park, with 193 solar panels, installed on the roof of the UN building was inaugurated by Prime Minister Narendra Modi during the high-level UN General Assembly session in September. At a contribution of about one million dollars, India had gifted the solar panels that have been installed on the roof of the UN Headquarters, one panel each for every 193 UN Member State.

The solar panels are powered up to reach the max of 50 kW of generation power. Energy generated in the park is equivalent to the energy that would have been created through the use of 30,000 kilograms of coal. It also has carbon sequestration of 1000 seedlings which will grow into trees over 10 years.