After a five-day tour of India, Britain’s Minister of State for South Asia, Lord Tariq Ahmad has said that UK and India are working to expand research and collaboration links to tackle climate change.

Speaking on this two-nation partnership, Ahmad stated, “India has quadrupled wind and solar capacity in the last decade and committed to net-zero emissions in the Indian Railways by 2030. I saw first-hand how we can work even more closely together on tackling climate action by sharing our solutions and expertise. Deepening UK-India collaboration will be crucial to building up to a successful outcome at COP26.”

Also, the minister indicated towards expanding existing work to tackle climate change ahead of the United Nations COP26 climate summit, to be held in Glasgow in November.

Lord Ahmad’s visit accorded with the launch of the UK’s Integrated Review, which strengthen the UK focus on Indo-Pacific partnerships, ahead of UK Prime Minister Boris Johnson‘s visit to India and the UK’s G7 Summit in June which Prime Minister Modi has been invited to join.

Additionally, his visit was intended to lay further groundwork for the British PM’s visit in April, covered meetings with leaders from Tamil Nadu to discuss how the UK could share expertise with India on offshore wind energy at the headquarters of India’s National Institute of Wind Energy in Chennai. He also invited India to attend the Global Offshore Wind Summit 2021 in London in September. 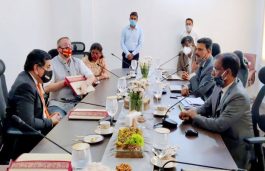 The FCDO perceived Tamil Nadu’s ambitious target for all taxis, two and three-wheelers in the state’s six major cities to be electric by 2030. And stated, “Both the UK and India are proud signatories to the Paris Agreement, and the UK is keen to work with India ahead of COP26 in November to lead the global shift to a low carbon economy and expand access to sustainable energy.”

Lord Ahmad further attended a roundtable at the Indian Institute of Technology (IIT) Madras Research Park to build on links between the state and Dundee Council, which is a world-leading city in the adoption of EVs.

More recently, a report from the Center for American Progress and India’s Council on Energy, Environment and Water, suggested that India and the US should work together to encourage greater foreign institutional investment in India’s green transition in order to help further progress the global effort to combat climate change, according to a new report. The report recommended that President Joe Biden and Prime Minister Narendra Modi launch a US-India Green Transition Finance Initiative, a program to mobilize private finance for India’s sustainable transition and make it the centerpiece of a new leaders-level climate change strategy.

Also this January, India signed a Memorandum of Understanding (MoU) with Uzbekistan for cooperation in the field of Solar Energy. The main area of work is to identify research/ demonstration/ pilot projects between the National Institute of Solar Energy (NISE), the Ministry of New & Renewable Energy (MNRE) India, and the International Solar Energy Institute (ISEI), Uzbekistan.