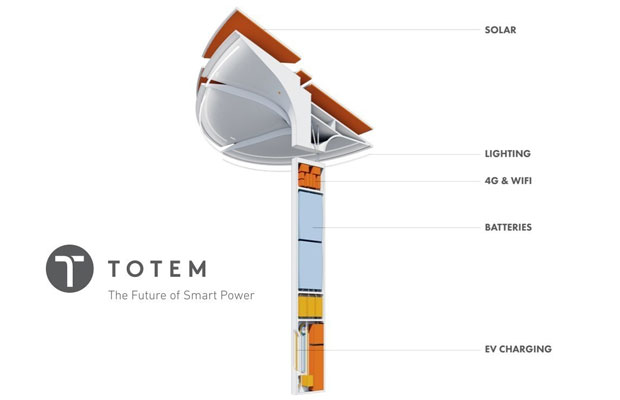 Totem has announced an innovative platform for modern companies and communities. The platform includes solar energy and energy storage, WiFi and 4G communications, electric vehicle charging, and smart lighting into a single, powerful product that weaves these capabilities directly into the built environment. Totem is expected to launch the product in summer 2017.

“Totem believes design can fundamentally change the world. We’re on a mission to realize the full potential of energy’s transformation by providing communities and corporations with intelligent, experiential and engaging structures – something that delivers powerful functionality and tells an easily understood story about clean energy and the next generation of critical services,” said Brian Lakamp, CEO and founder of Totem Power. “We are building technology for the cities of tomorrow.”

The company notes that Totem is positioned to be an integral component of smart cities and the emerging, dynamic energy networks that power them. With the scalable model, grid will be able to shatter the limits for solar and wind that the current network imposes.

The new model has been designed for placement in locations such as city streets, schools, corporate campuses and retail settings.

“By 2020, the construction industry has the potential to comprise over $10 trillion, including the largest number of green projects in our history. Despite vast regional distinctions, we all share the desire for smarter and better designed energy solutions.” said Jeffrey Kenoff a Director at Kohn Pedersen Fox. “Totem is one of the first to unite design, infrastructure, and community in a single as well as exquisite platform. It’s hard to imagine a major project or public space that it would not transform.”