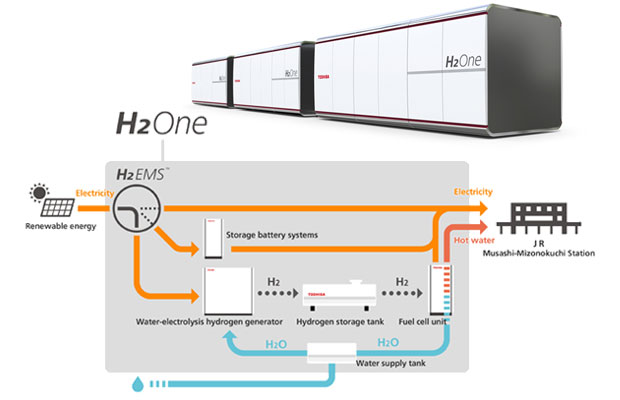 The firm will install its carbon dioxide (CO2)-free stand-alone hydrogen energy supply system at Musashimizonokuchi Station in Kawasaki City and will start operating from next year.

Toshiba offers four versions of H2One for a wide range of applications—the BCP model, a resort model, a remote island model and an office model. They are all contributing to the realization of an environmentally clean society where CO2-free electricity from hydrogen is widely used. It received an order for the product that it sells as a BCP (business continuity plan) model.

The company notes that in the event of a disaster, such as an earthquake that knocks out power supply, H2One will provide uninterrupted, off-grid energy supply. Hydrogen stored in the unit’s storage tanks will be fed to the fuel cell and generate electricity to light part of the station building, and so on. In normal, day-to-day operation, H2One will be used to generate electricity, and will also produce hydrogen using electricity generated by solar panels on the station building roof. H2EMS provides optimal control over the system’s overall operation, including hydrogen production volume, and power generation and storage.