Nowadays, solar power is among the cheapest sources of renewable energy available globally. However, there are various factors that are considered at the time of cost optimization of a solar power plant and module mounting structure (MMS) is also among them.

In order to successfully run a solar power plant, good quality of mounting structure plays a key role. On the flip side, faulty structures can prove to be a bane for the entire solar project. The reason could be faulty practices followed at the time of its designing and installation. 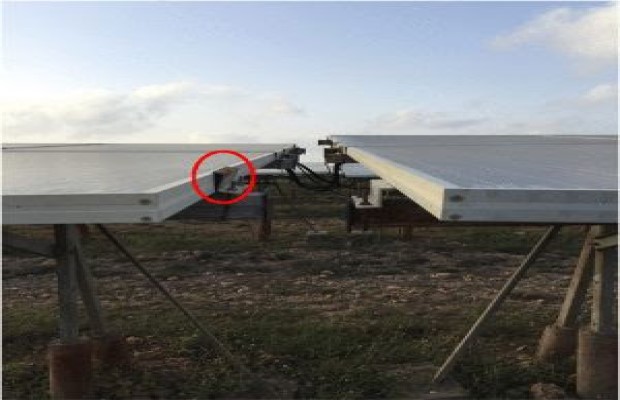 Here are some problems observed by PV Diagnostics, an onsite diagnostics services provider for solar plants, in module mounting structures in India during its analysis of various solar power plants:

There is a site in Gujarat with evident intra and inter string variable structural tilt along with variable azimuth tilt and caused shadow on another table adjacent to it. Variation in tilt was as high as 4 degree because of which, the adjacent tables were receiving variable radiations differing by as high as 2 percent. It was estimated that the non-optimally tilted table would cause an average reduction of 1 percent in the radiation annually. Also, the tables receiving less radiation would be generating 1 percent lesser power than the remaining tables. Similarly, variation in azimuth angle was as high as 3 degree in some of the adjacent tables which caused the radiation variation in the adjacent tables leading to mismatch loss.
This impact could be much higher if there is variation in both tilt and azimuth. Apart from the generation loss, this will also cause accelerated degradation due to mismatch and higher temperatures in affected tables.

The strength of the structure is tested when there is a high wind in the region. We have observed a high level of vibrations and noise around the tables at such times. The reason might be loose braces and/or unstable structures. Another possibility could be inaccurate assumptions of a maximum wind speed or even ignorance of the fact that the region under consideration falls under the higher wind speed zones. These structures also had torsional stresses with changing azimuth angles.

In seasonal tilt trackers, we have observed that the forward brace is found to be quite weak sometimes. Even under just the dead weight of the PV panels, it forms a ‘bow’ with a close to 9-12 mm deflection at the center.

4). Inappropriate tightening of clamps and nuts and bolts at cross bracing:

This may not look like a big concern at the time of installation but if the clamps or nuts and bolts are not tightened properly they can cause some serious damage to the structure. We noticed this issue in one of the sites in Gujarat where clamps and nuts and bolts weren’t tightened properly at cross bracing as a result of which braces started coming out and weakened the support of the tables. Clamps also got loosened and came out.

On the same site, we observed another major fault. Due to the improper tightening of braces, the whole table rotated on its axis and changed the tilt angle. As a result, there was high intra and inter-row shading among adjacent tables leading to power loss. Shadow existed on the modules for more than 3 hours on a summer day which adversely affected the generation. It was estimated that around 10 percent of the tables might be facing this issue causing an estimated loss of about 1 percent in a year. This may also cause accelerated degradation in the shaded modules.

6). Less ground clearance for the driveline:

We encountered this issue at a plant with trackers. The driveline drives the rotation in the torque tubes for all the rows in one block or array. During the monsoon, flowing water and soil clogs beneath the driveline. When this happens, the tracker’s block’s movement is obstructed and might stop which can be observed via the actuator’s electrical signature. The O&M team then has to immediately mobilize and take necessary action, i.e. closing the actuator, clearing the blockage and digging some more around it as future insurance. To avoid this, permanent V-drain type structures can be created below all drivelines, lined with ‘rubble soling’ to maintain the shape.

Another difficulty observed because of this low driveline was that it connected to a low lying actuator which has risk of inundation of poorly draining soils like clays. V-drains were again suggested to handle this situation.

7). Driveline slip due to slotted joints:

Purlin should be rigidly connected to the torque tube such that the torque tube can achieve rigid rotation of the Purlins and eventually the panels. We observed that the connection was badly articulated and has resulted in tearing and enlargement of the purlin hole, thus resulting in a ‘wobble’ of the purlin on the tube. This could prove catastrophic for the tracker, for any appreciable wind speed above 60 mph as there will be galloping or flutter of the panels + purlins, similar to a flag on a post, thus causing irreparable damage to the PV module. Our suggestion was to fortify the connection using plated or appropriate stiffening items to resolve this issue.

9). No scope of expansion to the modules:

One of the unique issues was found in a plant in Rajasthan where the EPC did not provide scope for expansion to the modules. As a result, the frame of the modules started bulging because of excessive heat in the region. The moisture started penetrating within the modules and reduced insulation resistance because of which there were repeated cases of tripping of the inverters. The O&M team bypassed the GFDI to prevent the tripping of inverters instead of solving the problem of insulation resistance and module expansion. By-passing GFDI further led to excessive PID in the plant leading to power loss.

10). Construction of a site on the basin of a salt lake:

On another site in Rajasthan located on the basin of a salt lake, we observed that the structures had high levels of corrosion driven by the highly corrosive nature of the soil and the hollow design of columns. Water collection inside the hollow columns further corroded the structure from inside. This can be rectified by repainting the structures with epoxy zinc coating to slow down the corrosion. The use of water for module cleaning provided moisture that accelerated the rate of corrosion and therefore we suggested reducing the water-based cleaning frequency to once in a month. Apart from this, we also suggested cleaning of structures using low power air-blasts to remove salt and soil deposits to overcome the problem of waterlogging, drain holes can be created at the bottom of the structure.

Thus, the issues found in module mounting structures may be because these are generally considered as the lowest technology aspect of solar installations, or are treated as the only iron & steel fabricated structure which can handle the solar photovoltaic modules. But these structures if not properly designed and installed can take away the entire hefty investments done by a solar project developer on installation of a solar power plant as it is expected to work for at least 20-25 years. Therefore, it is necessary to follow all necessary and standardized precautionary steps to be taken while designing and installing any solar project.