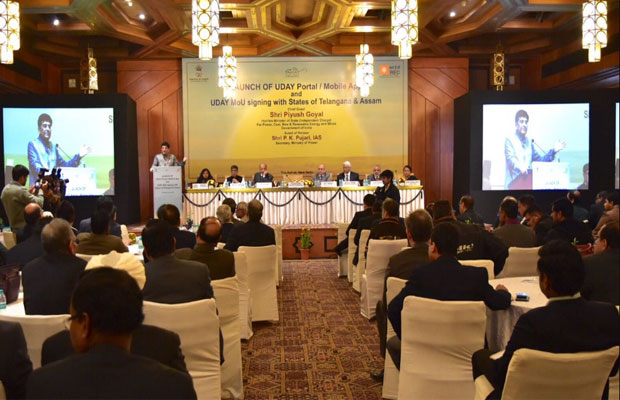 States with over 90% of Total DISCOM Debts covered under UDAY: Piyush Goyal

Renewable Energy Minister, Piyush Goyal on Wednesday launched UDAY’ Web Portal and Mobile App at an event.  During the event, the States of Telangana and Assam joined UDAY by signing Memorandums of Understanding (MOUs) with the Ministry of Power, for operational and financial turnaround of their respective DISCOMs, making the tally in the UDAY Club to 20.

Goyal at the event said that states with over 90% of total DISCOM debts are covered under UDAY scheme.  The Government of Telangana would take over Rs. 8923 crores of the total Rs.11897 crores of DISCOM debt, while the Government of Assam would take over Rs. 928 crores out of total Rs.1510 crores DISCOM Debt (being 75% of their respective DISCOM debt outstanding as on 30.09.2015, as envisaged in the scheme) and the balance debt would be re-priced or issued as State guaranteed DISCOM bonds. This would amount to annual saving in the interest cost of Rs. 387 crores to Telangana and Rs. 37 crores to Assam respectively. The interest cost on future borrowings is also expected to reduce, providing a saving of around Rs.30-40 crores to these States.

The gains to these states through Demand Side interventions in UDAY such as usage of energy-efficient domestic as well as industrial/commercial equipment is expected to be around Rs. 1200 crores & Rs. 260 crores respectively. The States of Telangana and Assam are also expected to benefit around Rs. 2250 crores and Rs. 520 crores respectively on account of the support being extended by the Centre through various coal reform measures.

An overall net benefit of approximately Rs. 6116 crores and Rs. 1663 crores would accrue to these States viz. Telangana and Assam respectively, under UDAY, by way of savings in interest cost, reduction in AT&C and transmission losses, interventions in energy efficiency, coal reforms etc. during the period of turnaround.

Giving examples of achievements in UDAY among States, the minister quoted the Rajasthan Discom where, in less than two years, annual losses of around Rs. 15000 crores will soon be converted into profits. He also talked about Haryana’s progress, where as an example, all 173 villages in Panchkula have received 24×7 Power Supply.  Goyal encouraged officials of the Ministry to think innovatively and come out with performance based rewards for best performing States under UDAY. He also talked about starting a ‘Citizen Poll’ to receive feedback on the ground level achievements of different schemes, which would help recalibrating their implementation process.