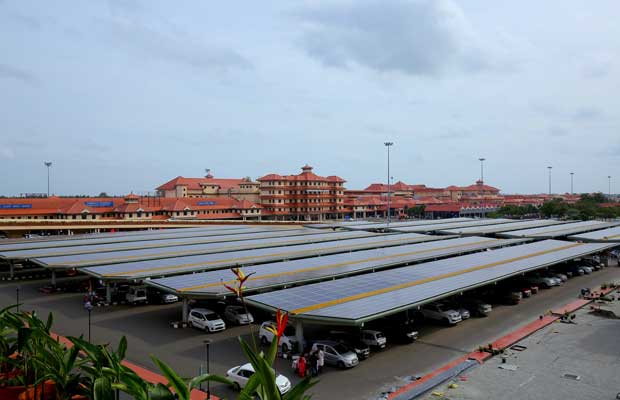 Tata Power Solar has announced commissioning of 2.67 MW of solar carport at Cochin International Airport. The project comprised of putting together 8472 solar panels on 27 carports spread over 20289.9 square meter of area. The entire solar plant is aimed towards reducing 1868 tonnes of CO2 annually.

The grid-connected car port plant required high-level engineering and designing skills for assembling the massive car port structures. Additionally, advanced technology and design was of utmost importance to match and maintain the quality standards in place.

Commenting on the completion, Mr. V J Kurian, Managing Director, Cochin International Airport Limited, said “Cochin International Airport Limited became the first Airport in the world to be fully powered by solar energy during August 2015. It has now accomplished another milestone by implementing India’s largest solar carport. We appreciate Tata Power Solar’s professionalism and thank them for completing this project in a record time.”

Commenting on the occasion, Mr. Ashish Khanna, ED & CEO, Tata Power Solar, said “It is a matter of great pride for us to be able to fulfill client’s objective in meeting the requirement of solar panels and in the process setting up of India’s largest carport. The project is a benchmark in terms of engineering expertise utilized in terms of complexities encountered considering the high water levels in backfilled lands. The modular design has helped us to execute the project in a record time and we are looking forward to more of these initiatives being replicated in other airports and commercial establishments.”