Utility scale solar in India has witnessed aggressive growth over the past two years with installations of approximately 9 GW to date, making up about 94 percent of total installations. Tata Power has come out on top with the largest share of operating solar projects in India, while ReNew Power comes out on top for the largest pipeline of large-scale projects in the country said Mercom Capital in its report.

With a steep fall in module prices over the last six months and slow development of the rooftop market, large-scale project development is expected to continue to make up a majority of solar installations in the country.

While developers like Adani and Azure have grown by building project pipelines organically over time, Tata Power and Greenko have taken the route of growth by acquisition. According to the research firm as the large-scale solar market grows, there are plenty of opportunities for entering the space though acquisitions.

Currently, there are approximately 200 developers with projects of at least 5 MW or more in operation. The top 20 developers account for almost 60 percent of all operating utility-scale projects in the country. Large conglomerates and private equity-backed pure-play developers are leading large-scale project development.

With the acquisition of Welspun Renewables’ portfolio, Tata Power is the top Indian solar project developer with operational utility-scale projects accounting for over 850 MW, almost 10 percent of the market, according to Mercom’s Solar Quarterly Market Update Dec 2016. With several large installations, Adani has jumped up to second spot with almost 800 MW and 9 percent of market share and is expected to take the top spot in 2017. 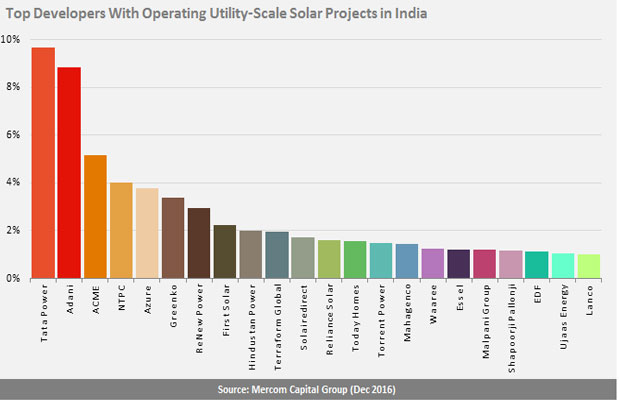 About 110 project developers have pipeline of 5 MW or more. ReNew Power is on top with a pipeline of over 1.3 GW accounting for nearly 10 percent of the market, with Adani taking the second spot again with over 1.2 GW, a 9 percent market share due to several project completions. Greenko follows closely with 8 percent largely due to its acquisition of the Indian project pipeline from SunEdison.

Adani is poised to become the largest Indian solar developer both in terms of operational and under development projects soon. 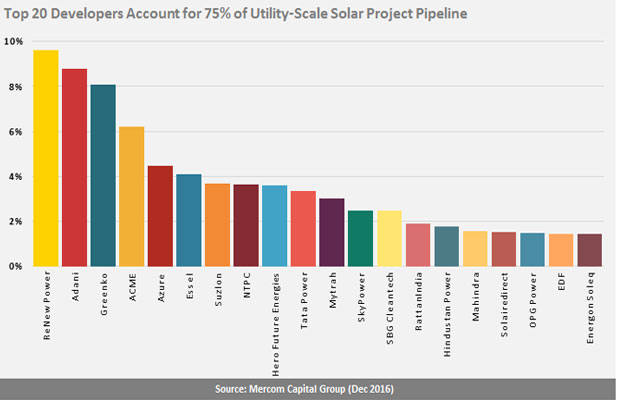