Tata Power Delhi Distribution (Tata Power-DDL), is sensitizing over 1 million consumers to join WWF’s global campaign for raising awareness on climate change issues – ‘Earth Hour’. ‘Earth Hour’ will be observed worldwide on Saturday, March 30, wherein people and institutions from across the world will switch off their electrical appliances and non-essential lighting for one hour from 8.30 to 9.30pm. Tata Power-DDL aims to save 80 -100 MW this year. Last year Tata Power-DDL managed to save around 70 MW during Earth Hour. 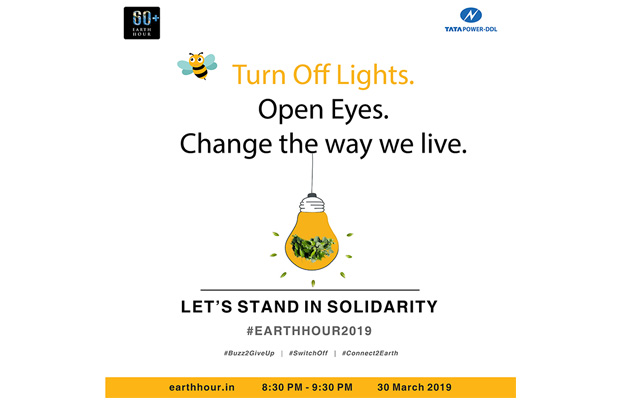 The company is sensitizing the consumers through sessions and by sharing awareness through SMS and electronic direct mailers. The company has also roped in RWAs and IWAs to mobilise the movement at the ground level.

Tata Power-DDL will also organise several candle light marches during the Earth Hour in association with residential welfare associations (RWA) members in its distribution area of North Delhi. It is also spreading the pre-Earth Hour awareness through its Social Media Channels (Facebook & Twitter).

Speaking about the cause, Mr. Sanjay Banga, CEO, Tata Power-DDL said, “Tata Power-DDL has always been an active promoter of energy efficient practices and reducing carbon footprints. With the climate change on the rise, adopting ecological practices including reduction of plastic and paper usage and living a sustainable lifestyle is the need of the hour. We are a proud supporter of the Earth Hour movement and urge people to come forward in large numbers and lend a unified voice for action against climate change”.

Tata Power-DDL has been an active contributor towards the Environmental Issues. The company encourages consumers to opt for e-bills under its ‘Green Customer’ initiative thereby reducing paper wastage and is promoting the use of Digital Payments amongst its consumers. Tata Power-DDL has also been supporting energy efficiency and energy conservation through various DSM (Demand Side Management) initiatives, ESCO services and Rooftop Solar programs. The company also spreads awareness for energy conversation amongst school students through its Club Enerji Initiative.

Tata Power-DDL is also working towards setting up of e-charging infrastructure in the National Capital. The company is also running a campaign against the use of plastic and is actively replacing plastic products and reducing its use in its work-sphere. Other environment positive initiatives include rain water harvesting and carpooling.