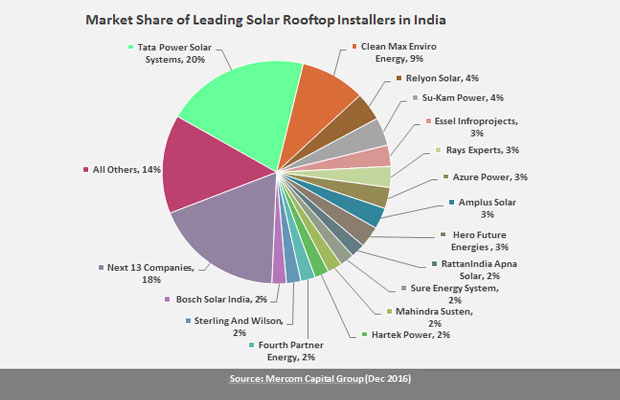 Tata Power has 20 percent of the market share and is by far the largest solar rooftop installer in a small market.

In India, the rooftop solar sector is beginning to show some growth. Within the past two years, cumulative rooftop solar installations have reached 605 MW, according to Mercom’s Solar India Quarterly Update.

Activity is ramping up with the Solar Energy Corporation of India (SECI) tendering a total of 1.5 GW of rooftop solar in calendar year 2016.

State incentives from Haryana, Chandigarh, Gujarat, Madhya Pradesh etc., have also provided a push for rooftop solar installations. In 2016, 275 MW of rooftop solar was commissioned which was more than the capacity commissioned in any other year.

With 20 percent of the market share Tata Power is by far the largest solar rooftop installer in a small market said the research firm in a statement. Rooftop solar installations are lagging far behind large-scale project development and government agencies are ramping up auction activity to close the gap.

The Ministry of New and Renewable Energy (MNRE) has also recently proposed an incentive program for distribution companies (DISCOMs) to spur the sector under which they can avail benefit of up to Rs.3.75 million (~$55,000)/MW for rooftop solar.