Tata Motors has partnered with the Haryana Renewable Agency to deploy Nexon EVs in the state, as a part of its tender with the EESL. 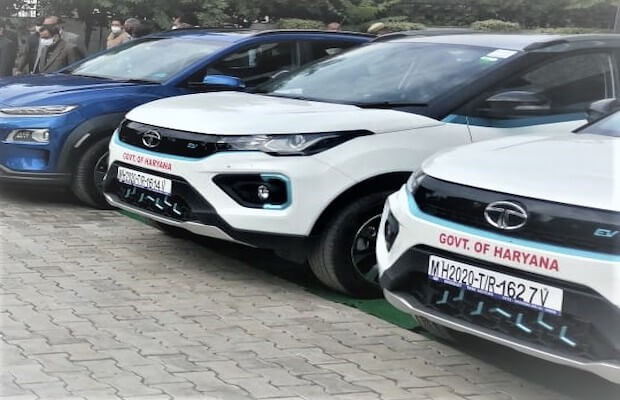 Tata Motors has announced that out has partnered with the Haryana Renewable Agency (HAREDA) to deploy Nexon EVs in the state of Haryana, as a part of its tender with the Energy Efficiency Solution Limited (EESL).

During the handover ceremony, the inauguration of the EV charging station took place in the presence of the Secretary in the Ministry of Petroleum and Natural Gas -Tarun Kapoor. During the ceremony, EESL also signed an MoU with the Government of Haryana to accelerate the adoption of electric vehicles (EVs) and strengthen charging infrastructure in the state.

Tata Motors has been playing a leading role in proactively driving the adoption of electric mobility in the country. The company is closely working with other Tata Group companies including Tata Power, Tata Chemicals, Tata Auto Components, Tata Motors Finance and Croma, to contribute to the faster adoption of EVs in India through its EV ecosystem called the “Tata uniEVerse”.

The firm claims that it has consistently catered to the evolving needs of customers for electric cars with the introduction of best-selling products, thereby commanding a market share of 67 percent in EVs in H1 FY21. With more than 2000 Nexon EVs plying on Indian roads currently, the electric SUV has been widely appreciated by customers and the industry alike.

The Nexon EV SUV delivers an anxiety-free long range on a single charge with zero emissions. It is equipped with a powerful and high-efficiency 129 PS permanent-magnet AC motor, powered by a high capacity 30.2 kWh lithium-ion battery. The EV comes with a best-in-industry dust and waterproof battery pack, which meets IP67 standards.

In December, the firm had announced that its flagship electric vehicle, the Nexon EV, has surpassed the 2000 sales milestone. The firm stated that in over 10 months, since launch, the sales of the Nexon EV reached 2200 units as of November 2020, indicating the rapid demand for the EVs in the personal car segment.