Home » News » Tamil Nadu to produce 3,000 MW of power in next three years through solar rooftop

Tamil Nadu to produce 3,000 MW of power in next three years through solar rooftop 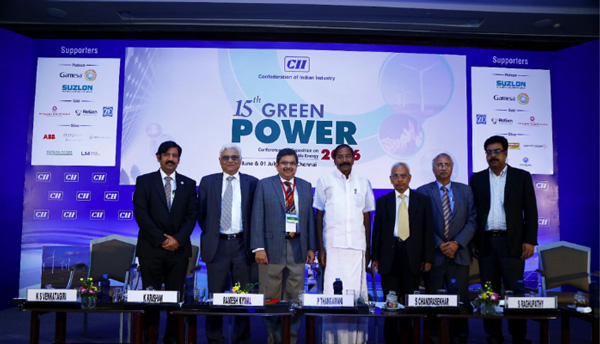 Tamil Nadu is planning to produce 3,000 MW of power in next three years through solar rooftop and develop green villages.

Speaking on the sideline of 15th edition of CII Green Power 2016 P Thangamani, Minister for Electricity, Prohibition and Excise said that the state has developed a vision to become a global leader in renewable energy.

The minister said that in next 3 years, 3000 MW of power will be produced  in the state through solar rooftops which would considerably reduce the energy demand from coal powered thermal power plants and reduce carbon emissions.

Jagmohan Singh Raju, IAS, Additional Chief Secretary and Chairman and Managing Director, Tamil Nadu Energy Development Agency (TEDA) said “Tamil Nadu Government will facilitate business-friendly polices to promote technology in a big way in the renewable energy sector with the inputs from the industry. Through its Solar Policy of 2012, the State Government has been promoting power generation by both the large investors and small households.” He further added “Tamil Nadu Government is planning to develop green villages by making use of all resources available locally to produce power for the village. “

TEDA will also focus on skill development and create initially a `Green Army ‘of 5,000 technicians in different parts of the State.

Ramesh Kymal, Chairman, Renewable Energy Council, CII-Godrej GBC said “renewable energy has become a part of the mainstream energy and  we should build on this growth momentum. The Union government   has set a target of 175 GW of renewable energy generation capacity by 2022. The estimated investment for this would be $160 billion during the next five to six years. He added “To hit these targets and to unleash the full potential of the renewable energy sector in India.”