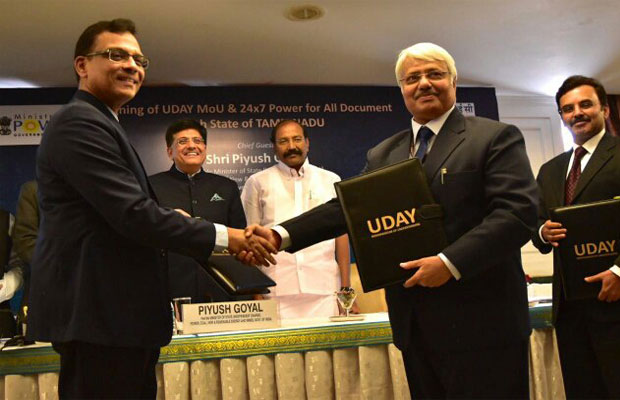 State to derive an Overall Net Benefit of approximately Rs. 11,000 crores through UDAY

The Government has signed a MoU with Tamil Nadu and the State DISCOM TANGEDCO under the UDAY for operational and financial turnaround of the DISCOM.

Union Minister of State for Power, Coal, New & Renewable Energy and Mines,  Piyush Goyal presided over the signing of the Memorandum of Understanding (MOU) under the Ujwal DISCOM Assurance Yojana (UDAY) Scheme with the Government of Tamil Nadu in New Delhi on Monday.

Tamil Nadu would derive an overall net benefit of approximately Rs. 11,000 crores through UDAY, by way of savings in interest cost, reduction in AT&C and transmission losses, interventions in energy efficiency, coal reforms etc. The state also signed 24X7 Power For All document on the occasion. With Tamil Nadu joining the cause, 92% of country’s Discom debt has been covered under UDAY

By signing the MOU under UDAY, the State Government is taking over 75% of debt of Rs. 30,420 crores of TANGEDCO. The scheme also provides for the balance debt to be re-priced or issued as State guaranteed Discom bonds, at coupon rates around 3-4% less than the average existing interest rate. The State would have savings of about Rs.950 cr. in annual interest cost through reduction of debt and through reduced interest rates on the balance debt.

UDAY lays stress on improving operational efficiencies of the DISCOMs. Tamil Nadu and TANGEDCO have committed to bring about operational efficiency through compulsory feeder and distribution transformer metering, consumer indexing & GIS mapping of losses, upgrade/change transformers, meters etc., smart metering of high-end consumers, reduction in transmission losses and increased power supplies in areas with reduced AT&C losses. The reduction in AT&C losses and transmission losses to 13.5% and 3.7% respectively is likely to bring additional revenue of around Rs. 1,601 crores to TANGEDCO.

Demand Side interventions in UDAY such as usage of energy-efficient LED bulbs, agricultural pumps, fans & air-conditioners and efficient industrial equipment through PAT (Perform, Achieve and Trade) would help in reducing peak load, flatten load curve and thus help in reducing energy consumption in Tamil Nadu. The gain is expected to be around Rs. 2,304 crores.

The Central government would also provide incentives to the State Government and the Discom for improving the power infrastructure in the State and for lowering the cost of power. The State would get additional/priority funding through the Central schemes such as Deen Dayal Upadhyay Gram Jyoti Yojana (DDUGJY), Integrated Power Development Scheme (IPDS), Power Sector Development Fund (PSDF) or such other schemes of the Ministries of Power and New & Renewable Energy, if they meet the operational milestones outlined in the scheme.

The State shall also be supported through additional coal at notified prices and in case of availability through higher capacity utilization, low cost power from NTPC and other CPSUs. Other benefits such as coal swapping, coal rationalization, correction in coal grade slippage, availability of 100% washed coal would help the state to further reduce the cost of power.

The State would gain around Rs. 4,320 crores due to these coal reforms. With the financial turnaround through financial and operational efficiencies, TANGEDCO’s rating would improve, which would help in raising cheaper funds for its future capital investment requirement. This is expected to provide interest cost saving of around Rs. 60 crores for TANGEDCO in 3 years.

The ultimate benefit of signing the MOU would go to the people of Tamil Nadu. Higher demand for power from DISCOMs would mean higher Plant Load Factor (PLF) of generating units and therefore, lesser cost per unit of electricity thereby benefitting consumers. Availability of 24×7 power for all would increase the economic activity and improve employment opportunities in the State.

UDAY was launched by the Government of India on 20th November, 2015 to ensure a permanent and sustainable solution to the debt-ridden Distribution utilities to achieve financial stability and growth, now has 21 States in the Club after Tamil Nadu coming on board.