As one of the top ten cement companies in the world, Taiwan Cement (TCC) greatly emphasizes on the climate and environmental impacts the cement industry causes. 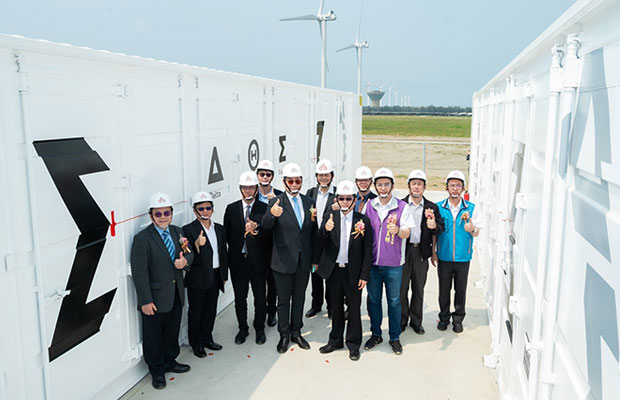 On March 31, 2021, TCC Group and TCCGE announced the beginning of the operation of Taiwan’s First AFC Smart Storage System with a capacity of 5MW, which is Taiwan’s first large-size energy storage project.

TCC Chairman Nelson Chang states, “Everyone has only one nationality, Earth.” In 2020, TCC joined industry peers to support the Climate Ambition to deliver carbon neutral concrete products in 2050 announced by the Global Cement and Concrete Association (GCCA) and committed to lower carbon footprint of cement and ready-mixed concrete (RMC) products. In recent years, TCC Group has been amplifying efforts to build a circular economy and renewable energy installations. Combining the technology and expertise of the two subsidiaries: TCC Green Energy (TCCGE) and E-Moli, TCC began developing “energy creation” and “energy storage” for renewable energy sources. TCC’s board of directors recently passed the resolution to invest up to NT$10 billion ~US$350 million to build a super battery factory in Kaohsiung, the largest city in southern Taiwan.

In 2019, TCCGE unveiled Taiwan’s first Solar-Wind Renewable Power Station using the most advanced solar panels to enhance power generation and minimize the impact of the shaded area caused by the wind power installation to optimize the use of the land and natural resources. On March 31, 2021, TCC Group and TCCGE announced the beginning of the operation of Taiwan’s First AFC Smart Storage System and TCCGE Changbin Base with installation capacity of 5MW. The installation will be connected to the grid in April 2021. This is Taiwan’s first large-size energy storage project. Automatic Frequency Control (AFC) is a system that provides automatic frequency control mechanism to stabilize renewable energy when connected to the overall electricity grid. The system can prevent electricity service interruptions caused by grid imbalance and improve electricity stability in Taiwan. TCCGE also has another project in southwestern Taiwan that combines fishery with solar power generation. Furthermore, TCCGE is planning to build a geothermal power station in eastern Taiwan within a demonstration park called Hongye Valley that combines power generation with local community rejuvenation through tourism and local shops.

TCC board of directors recently passed the resolution to invest up to NT$10 billion (~US$350 million) to set up Taiwan’s first super battery factory in Kaohsiung with the focus of manufacturing high-end, high-capacity, and high-charge-discharge nickel ternary batteries. The planned capacity is 1.8GW, equivalent to the volume of long-distance batteries needed for the annual production of 24,000 electric vehicles. Currently, E-Moli’s annual capacity of its Tainan plant is 1.5GW.

TCC Chairman Nelson Chang noted, “Mobile energy is the most important technological development for the future and batteries plays a key role. The modern life is filled with various power outlets and our imagination has been trapped by conventional power cords and connection technologies. With the development of the super battery, in the future, there might be a chance to breakthrough these conventional connectivity solutions to create infinite possibilities.”