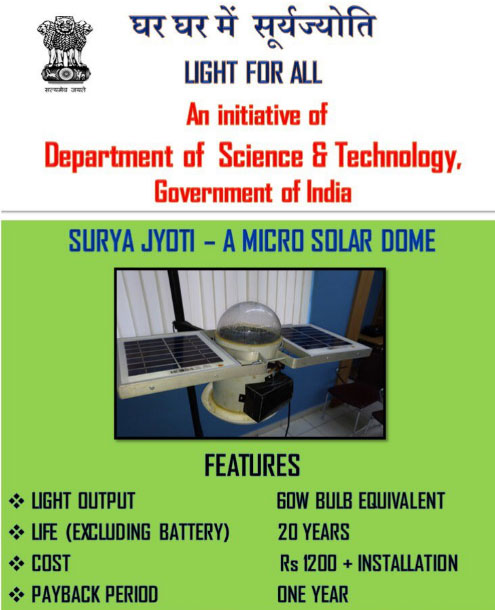 Surya Jyoti – a low cost and energy efficient Photo-Voltaic (PV) Integrated Micro Solar Dome (MSD) has been developed under the aegis of Department of S&T, in order to capture day light and concentrate the same inside a dark room, particularly in urban slum or rural areas which lack electricity supply.

The minister via a micro blogging site said “It’s a day & night lighting single device unique in its features. Its leak proof & works throughout day &4 hours continuously after sunset.”

Addressing the media, Vardhan said that Surya Jyoti will increase the productivity of women who stay at home and are involved in small income generation activities.  The Micro Solar Dome (MSD) is a clear and green energy initiative of the Department of   Science and Technology. The Minister added that this project will also supplement the Green Energy initiatives.

The Micro Solar Dome (MSD) features a transparent semi-spherical upper dome made of acrylic material which captures the sunlight and the light passes through a sun-tube having a thin layer of highly reflective coating on the inner wall of the passage. It also contains a lower dome made of acrylic. There is a shutter in the bottom of the lower dome which can be closed, if light is not required in the daytime.  It is leak proof and works throughout the day and 4 hours continuously after sunset.

The potential users of this device are the 10 million off-grid households in urban and rural spaces and several folds more that do not have reliable access to electricity. When these Surya Jyoti lamps, giving an illumination equivalent of a 60W incandescent lamp, are installed in 10 million households it would lead to a saving of 1750 million units of energy. It would also lead to an Emission Reduction of about 12.5 million ton of CO2.

According to the ministry, about 1000 Micro Solar domes are now working in the slums of Delhi, Kolkata, Agartala, Guwahati, Bhopal and Bengaluru. The demand of the product is increasing manifold as more and more people are becoming aware of the unique benefits of using the product.

The latest Surya Jyoti operates in three modes, day light without any electricity, night time with solar PV and night time with conventional grid after 17 hours of operation.

The manufacturing process of the device is labor intensive and is expected to generate huge job opportunities.  A monthly production of 6000 units is envisaged by December, 2016 which will go up to 20000 by March 2017.

The Department of Science & Technology along with Ministry of New and Renewable Energy (MNRE) will take it up for larger distribution in bigger areas.

The PV Integrated Micro Solar Dome has been included as a product for off grid solar lighting applications by Ministry of New and Renewable Energy and is eligible for subsidy at par with other solar lighting products. Attempts are being made to integrate Surya Jyoti for subsidy in rural and urban housing schemes, MP Local Area Development Schemes and corporate social responsibility activities of public sector enterprises.