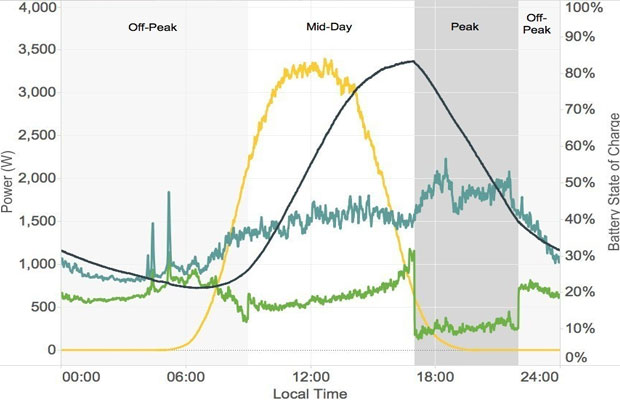 Sunverge systems add high-capacity storage to solar rooftop installations, allowing customers to capture the power they generate and, thanks to built-in intelligence, automatically use it when demand and energy prices are highest. In Hawaii, which already has some of the highest electric rates in the nation, these Time-of-Use rates will make Sunverge’s cost-saving technology even more valuable to consumers. Additionally, Sunverge’s storage technology is key to taking advantage of the Customer Self Supply tariff approved by the Hawaii Public Utilities Commission (PUC) last October. Applications for interconnection of self-supply installations in areas with high levels of PV (photovoltaics) will be expedited by HECO.

Based on a typical Hawaii home load profile and the state PUC’s proposed time-of-use rates in Oahu, Sunverge customers who select the Customer Self Supply option can save up to 80 percent on their monthly power bill notes the company.

“We’ve been evaluating the benefits of distributed storage since 2012,” said Chris Reynolds, System Operations Manager at Maui Electric, a subsidiary of Hawaiian Electric. “Such intelligent energy storage will play a vital role in our goal to generate 100 percent of Hawaii’s energy from renewable sources.”

Customer Self Supply is likely to become a preferred option for many customers, particularly because of limits to the alternative solar tariff known as Customer Grid Supply, which is similar to the state’s former Net Energy Metering (NEM) arrangement. Customer Grid Supply pays customers a reduced amount versus NEM for any energy exported to the grid, and is capped by the state PUC at 25 MW of distributed solar on Oahu, 5 MW on Maui, Lanai and Molokai, and 5 MW on the Big Island of Hawaii. Those levels are likely to be reached by the end of 2016 or early 2017.