SunPedal Ride of 70 days to raise solar awareness in India 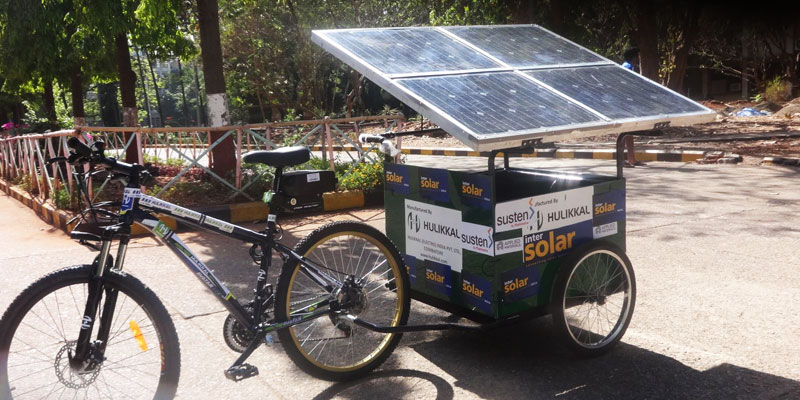 IIT Bombay alumnus from Energy Science Department, Sushil Reddy will be riding a solar powered electric bicycle across 5 states and 7000+ kms in India starting 7th May 2016 to raise solar awareness in the country.

The SunPedal ride will be of approximately of 70 days which will be done with a support vehicle and a support crew. Rajendra Bhaskar, an IIT Bombay student will be riding along Sushil throughout the journey as a support crew.

Throughout the journey Sushil Reddy and the crew will talk to people about about the energy scenario, electricity scenario and the solar energy scenario in India giving facts and numbers. These facts and numbers are backed by team kWatt Solutions Pvt. Ltd. They will also talk about the importance and potential of solar energy, the challenges and opportunities in this upcoming solar energy sector and motivate people to go for solar. The solar bicycle demo will also be given during the journey.

Government of India launched the Jawaharlal Nehru National Solar Mission (JNNSM) under which, the target is now to generate 100GW of Solar Power in India by the year 2022.

There is an estimated requirement of 3,00,000 skilled solar professionals comprising of multiple skill set ranging from research, design, engineering, installation, operation and maintenance, sales and marketing. Currently, the number of skilled solar technicians in India is approximately 40,000. There is an urgent need to empower people with solar and spread awareness about the opportunities available in the upcoming solar energy sector.

The SunPedal Ride is supported by the Title Sponsor InterSolar which is organized by MMI India Pvt. Ltd. The renewable energy group Mahindra Susten and Applied Materials are the co-sponsors for the ride.

The Solar Bicycle will showcase the application and potential of solar energy throughout the ride. The ride is aimed to unite and educate people over a cause which will dominate the future energy needs.

The route of SunPedal Ride has been chosen and planned considering maximum sunshine, favorable terrain, weather and safety for cyclists.