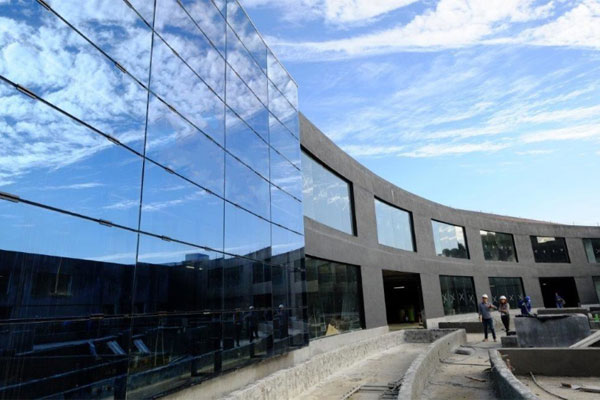 SUNEW, a Brazilian company located in one of the principal poles of solar energy on the planet, just announced the largest global use of OPV (Organic Photovoltaic) technology, considered to be the third generation in solar energy, installed on the outside of a commercial building. OPV used on glass is capable of transforming sunlight into electricity, and the area where it will be used will be sufficient to prevent the emission of 578 tons of CO2 per year.

The initiative marks the start of availability of the OPV solution for large-scale use in the global market. “The investments to develop the technology and for factory installation were US$ 30 million. Today we have the highest production capacity in the world, and we can handle demand for 400,000 m2 of organic photovoltaic film per year,” said Marcos Maciel, CEO of SUNEW.

Considered to be the future of solar energy, the photovoltaic cells are different mainly because they allow more use of solar energy in locations where the previous technologies could not be used. The innovation is 40x lighter, 50% more transparent, and 100% flexible in comparison with the conventional rigid plates used in other generations.

The undertaking was created as a model for the new generation of buildings, which combine innovation with sustainability. “When we discovered OPV technology and SUNEW, we were ecstatic with the results it could bring to our undertaking and to others that have already been built,” said Rafael Cosentino, CEO of Inovalli, the construction company responsible for the project.

The technology is sustainable starting with the production process, which involves 20x less energy than manufacturing traditional panels. The project has the potential to guarantee up to 44 points on LEED certification, which was created to classify sustainable constructions in accordance with criteria for rational use of resources.  If the thermal load on a building façade is reduced using OPV, a building’s total energy consumption can be reduced by up to 10%.