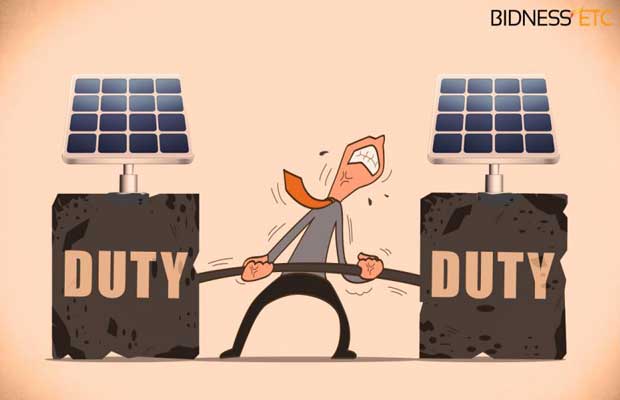 Ministry of New and Renewable Energy (MNRE) has cautioned anti dumping authorities against imposing high duties on imported solar equipment on the grounds that this can increase tariffs, make several projects unviable and seriously hamper the growth of the sector.

According to the MNRE notification to the Directorate General of Anti-Dumping (DGAD), the ministry said domestic capacity is very short of the requirement of India’s 100 gigawatt target of solar power by 2022, and that developers should be given sufficient notice about any duty to be levied because “sudden imposition” can disrupt ongoing solar projects and create legal complications.

The ministry intends to help local units, but it has stated that if at all a duty is imposed on imported solar cells, panels or modules, “it should be moderate so that there is not too much impact on solar power tariffs, otherwise the growth of the solar sector may be negatively affected”.

To help strengthen local manufacturing, the finance ministry should consider transferring the proceeds from any such duty to the MNRE.

The DGAD had sought the ministry’s opinion on a petition by the Indian Solar Manufacturers Association (ISMA) in June this year seeking anti-dumping duty on solar equipment from China, Malaysia and Taiwan, which are hurting local industry. As per reports, more than 90 percent of the solar modules used in Indian solar projects are imported from these three countries. The DGAD’s first hearing on the subject is scheduled for December 12.

MNRE has sent a memorandum to Sunil Kumar, additional secretary, who is chairing the hearing, saying that while the costs of imported solar cells and modules were indeed “artificially low”, anti -dumping duty can seriously impede India’s ambitious solar energy programme.

The memorandum notes that imported solar cells cost around 21 cents per watt, while locally made ones cost 30-31 cents. It has calculated that using only locally manufactured solar photovoltaic (PV) modules will translate to a difference of nearly 50 paise per unit of power supplied.

“This means an additional cost of Rs 10 lakh per MW to the consumer,” it says. “Imposition of anti-dumping duty will increase the landed cost of solar PV cells and modules, which in turn will increase the cost of setting up solar PV plants in India and will ultimately result in higher power tariffs.

If at all anti-dumping duty is to be imposed, the memorandum adds, “the ministry would request that the quantum of anti dumping duty should not be more than seven cents, which will ensure that project costs are not increased beyond acceptable levels.”

“It would be advisable if the notification … provides for a sufficiently prospective effective date so that enough time is available for industry to align to the new prices.” Indeed, it wants all projects, whose power purchase agreements (PPAs) have been signed and tariffs fixed, to be exempted. “Further, anti -dumping orders should not be applicable to projects which have already got a signed PPA or which have already completed the bidding process,” it adds.

According to MNRE, local units are in no position to meet India’s ambitious requirement of clean energy. “India has solar PV manufacturing capacity of around 3 GW for solar PV cells and 7-8 GW for solar PV models,” it says. Noting that India’s current solar capacity is only around 13 GW, it points out that the country will need to add 15-20 GW every year over the next five years to make up the deficit of 87 GW. “Present domestic manufacturing capacity is not adequate to cater to the yearly targets, especially of solar cells,” it says.