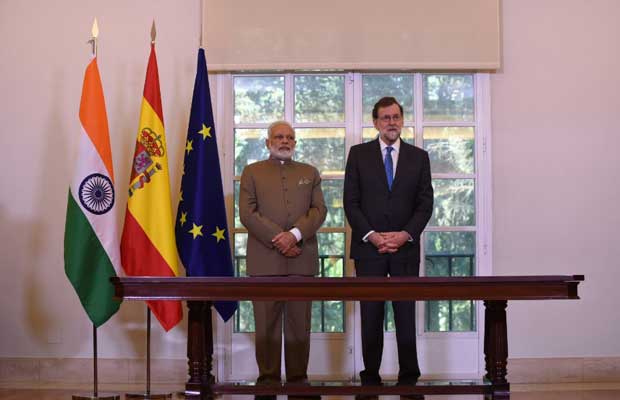 It is a great time for Spanish firms to invest in India whose strong economic growth offers “many opportunities” for them in fields of infrastructure, defence, tourism and energy, Prime Minister Narendra Modi said.

Modi, the first Indian prime minister to visit Spain since 1992, said India and Spain maintain close and cordial relations and he sees great potential in this collaboration.

“The strong economic growth of India offers many opportunities for Spanish companies,” Modi told Spanish daily Expansion in an interview.

“It’s a great time for Spanish companies to invest in India.”

He said that there are already a large number of Spanish companies in India and his government wants more firms to come, invest and do business in the country.

“Spanish firms enjoy a worldwide reputation in various fields, such as infrastructure, defense, tourism and energy. These sectors have also been identified by my government as priority sectors,” he said, adding that there are many complementarities in economic terms between the two countries.

Spain is the 12th largest investor in India and the seventh largest trading partner in the EU. There are more than 200 Spanish companies in India that are actively involved in road construction projects, railways, wind power, water desalination, defense and smart cities.

There are more than 40 Indian companies in Spain, in the fields of technology, pharmaceuticals, automotive and energy.

“There are synergies between the experience and priorities of both countries and numerous possibilities for additional investments,” Modi said.

“I see many complementarities between my Government’s flagship initiatives, such as Make in India, and Spain’s experience in defense, transport infrastructure, high-speed trains, water and waste management and technologies. I encourage Spanish companies to take advantage of these opportunities,” he added.

Modi said he was personally committed to helping foreign companies set up operations in India.

“We should also increase cooperation in the strategic field in areas such as cyber security, maritime cooperation and defense,” he said.

Underlining that Spain and India have been victims of terrorism for a long time, Modi said that both countries need to unite to strengthen the global fight against terrorism, which is the most serious threat facing humanity today.

Recalling his meeting with Spanish President Mariano Rajoy in November 2015 on the sidelines of the G20 summit, Modi said he has “a great interest in promoting the talks and drawing together an ambitious road map for a greater bilateral commitment between India and Spain.”

Modi is the first Indian prime minister to visit Spain since Narashima Rao’s trip to the country in 1992.