A standard array of two panels will cost around $4500 including installation having a life span of at least 10 years. 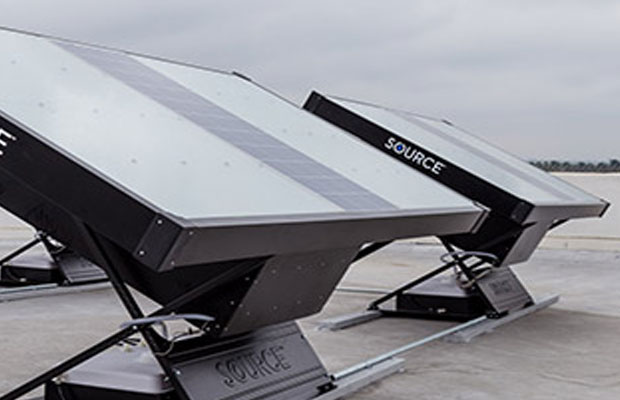 SOURCE device by Zero Mass Water is a rooftop solar device which produces water also with the electricity. The water is produced by harvesting water vapor from the air, condensing it to liquid. The technology behind the system is known as SOURCE array of which a standard unit is made of two hydropanels and to which a complementary panel can also be added to produce water or for the local climate constituted as self-contained unit ready to be mounted on rooftops.

The SOURCE device is capable of producing an average of 4-10 liters of water a day. A preinstalled reservoir collects and mineralizes the water with magnesium and calcium up to a capacity of 30 liters, connected directly with taps or dispensers read to drink. With annual filter changes and swapping out the mineral cartridge every five years under 5 years of subscription program has no other major maintenance cost is involved.

A standard array of two panels will cost around $4500 including installation having a life span of at least 10 years breaking the average cost to be $1.23 a day or somewhere between $ 0.12 and $0.30 a liter.

The SOURCE is also been proved to be efficient in low-humidity and arid regions as claimed by Zero Mass Water by quoting “Our array on the Zero Mass Water headquarters in Scottsdale, Arizona makes water year-long despite low relative humidity. The Phoenix-Metro area can get below 5% relative humidity in the summer, and SOURCE still produces water in these incredibly dry conditions.”