Solar’s Share in India’s Power Generation on the Rise: Accounts for 1 Percent of Total Electricity Generated

With increasing installation activity, the solar sector has come a long way in the past two years in India. Solar share in India now accounts for almost 1 percent of total power generated and 13 percent of the total renewable power generated in the country. Solar accounted for 7,002.71 million units of electricity produced in the country during the seven-month period from April to October 2016, according to the Central Electricity Authority (CEA).

Solar energy generation continues to increase. In 2016, solar produced 3,072.41 million more units compared to the seven-month period from April to October in 2015. 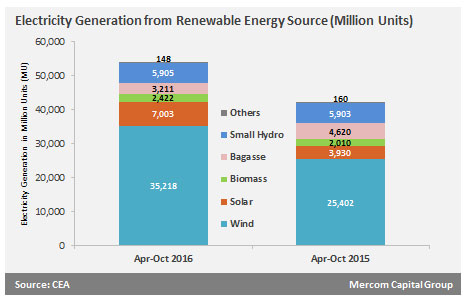 According to Mercom’s India Solar Project Tracker, over 4 GW of solar has been commissioned this year compared to 2.3 GW in all of 2015. Government policies and subsidies are helping the sector grow. With solar installations forecasted at more than 9 GW in CY 2017, the share of solar power generation is expected to continue increasing.